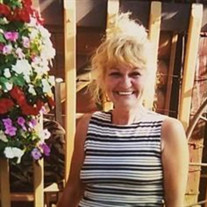 Alice Irene (Castner) Hayes, age 63 of Baltic, formerly of Cambridge, passed away on Friday, January 15, 2021 at Community Hospice in New Philadelphia. She was born in Washington County, Pennsylvania on March 9, 1957. Ms. Hayes was a graduate of Fort Cherry High School in Washington Co. PA. Ms. Hayes was a free spirit with an infectious smile, and a heart of gold. Her laugh was unique, and was enough to make you smile all on its own. She enjoyed music whether it was singing or dancing, or just simply taking a ride down old country roads just to listen to the radio. She loved being silly with her grandchildren and spoiled them with love every chance she had. Alice dedicated her life to being a mother and anyone that knew her knew her girls were the loves of her life. Alice is survived by: her mother Margaret (Matalik) Castner of Washington County, PA; two daughters, Amy (Derek) Gibson of Lore City and Megan Hayes (Seth Cross) of Cambridge; four grandchildren, Sophia, Kalon, Paisley and Ryleigh; her siblings, Carole (Paul) Heerdink of Bloomington, Ind., Nancy (late Dave) Harmon of Burgettstown, Bonnie (Robert) Clark of Pinellas Park, Fla., Marjorie (late Phil) Levato of Canonsburg, Rita (Bernie) Handerhan of Little Elm, Texas, Patricia Castner of Canonsburg, Bella (Jim) Dodd of Cambridge, Ohio, John (Stephanie) Castner of Burgettstown, and Larry and Mark Castner, both of Canons burg. She is preceded in death by: her father Alfred Castner and two brothers, Robert Castner, and Terry Castner. A memorial service will be held at a later date in Northwood Cemetery. Alice's online guest book may be viewed and signed at www.bundy-lawfuneralhome.com.

Alice Irene (Castner) Hayes, age 63 of Baltic, formerly of Cambridge, passed away on Friday, January 15, 2021 at Community Hospice in New Philadelphia. She was born in Washington County, Pennsylvania on March 9, 1957. Ms. Hayes was a graduate... View Obituary & Service Information

The family of Alice Irene Hayes created this Life Tributes page to make it easy to share your memories.

Send flowers to the Hayes family.