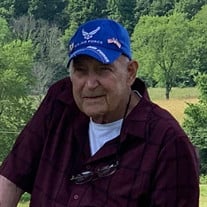 Anthony Walter "Tony" Exler, 77 of Norwich, passed away Wednesday morning, March 25, 2020, at Genesis Hospital Emergency Room. He was born January 5, 1943 in Pittsburgh to the late Francis (Marion) Exler and Marie Godwin. Tony retired from Centria after many years of service. He was a 1960 graduate of Bridgeville High School. Tony was a lifetime member of the Elks, the NRA, the Zanesville Rifle Club, and a lifetime member of the Collier Sportsman's Club. He was Presbyterian by faith. In addition to his parents, Tony was preceded in death by brother, Fred Exler and son-in-law, Terry Grywalski. He is survived by his wife Linda (Godwin) Exler, whom he married December 1, 1967; daughters Tammy (Rob) Yurco of Cambridge and Traci Grywalski of New Concord; grandchildren, Austin Miller and wife Kim of Utah, Clayton Neal and wife Hope of New Concord, Tanner Yurco, Lane Yurco, Waverly Yurco and Mitchell Yurco all of Cambridge; sister, Janet (Stan) Leghorn of Bridgeville, PA; brother Frank Exler of Bridgeville, PA., half-siblings Kathy, James, and Chris of Pennsylvania; several nieces and nephews and many friends. There will be no calling hours or services at this time. A celebration of Tony's life will be held at a later date. Memorial contributions can be made in Tony's name to the National Kidney Foundation, Kidney Care Center of Cambridge or the New Concord Fire Department. Tony's online guest book may be viewed and signed at www.bundy-lawfuneralhome.com.

The family of Anthony Walter "Tony" Exler created this Life Tributes page to make it easy to share your memories.

Send flowers to the Exler family.