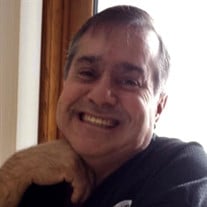 Basil John “Bill” Nicolozakes, age 63 of Cambridge, passed away on Sunday, May 5, 2019 at Genesis Hospital in Zanesville. He was born on December 24, 1955 in Cambridge, a son of the late Stanley Nicolozakes and Frances (Stathakis) Nicolozakes. Bill was a class officer and a 1974 graduate of Cambridge High School and furthered his education at The Ohio State University and graduated in 1978 with a degree in Welding Engineering, and later went on to become a Professional Engineer. Early in his career he lived in Chicago and helped build reactors for nuclear energy plants and later moved to Groton, Connecticut and built reactors for naval submarines, where he later developed a patten for a welding process. In the early 1980’s he came back to Cambridge and worked in the family business since then. Bill was a member of the Cambridge Rotary; and the American Welding Society. He was an avid Buckeyes and Steelers fan and enjoyed jet skiing and going to the lake. He was known for collecting elephants with their trunks in the air, which is a sign of good luck. He loved projects and tinkering and often tore things apart and put them back together just to see how they worked. In his younger years he enjoyed going to friends homes with younger children on Christmas Eve to help assemble their Christmas toys. His favorite stop every day was to Kennedy’s Bakery for a fresh pepperoni roll and two cartons of milk. Survived by: two children, Stanley Jacob “Jake” Nicolozakes and Alexa Marie Nicolozakes of Cambridge; the mother of his children, Laura Nicolozakes of Cambridge; two brothers, Dean (Tina) of Cambridge and James (Connie) of Cape Coral, Florida; several nieces and nephews, Deanna Nicolozakes of Coconut Creek, Florida, John Stanley Nicolozakes of Cambridge, Hannah (Michael) Moore, Blake Moore, Elena Nicolozakes and Demi Nicolozakes, all of Cape Coral, Florida; and five beloved aunts and uncles, John & Mary Feotis of Salt Lake City, Effie Iwankowski of Detroit, Irene Karash of Detroit; Helen Vitakis of Cleveland and Judy Tukesbrey of Chicago; and numerous beloved cousins. Visitation will be at Bundy-Law Funeral Home on Thursday, May 9, 2019 from 3 to 7 pm. A prayer service will be held at 6:30 pm. Funeral services will be held at 11 am on Friday, May 10, 2019 at Christ the Saviour Orthodox Church at 282 S. 5th St, Byesville, OH 43723 with Father Michael Ziebarth officiating. Burial will follow in Northwood Cemetery. Memorial donations may be made to the Cambridge Rotary or to the Christ the Saviour Orthodox Church. Bill’s online guest book may be viewed and signed at www.bundy-lawfuneralhome.com.

Basil John &#8220;Bill&#8221; Nicolozakes, age 63 of Cambridge, passed away on Sunday, May 5, 2019 at Genesis Hospital in Zanesville. He was born on December 24, 1955 in Cambridge, a son of the late Stanley Nicolozakes and Frances (Stathakis)... View Obituary & Service Information

The family of Basil John "Bill" Nicolozakes created this Life Tributes page to make it easy to share your memories.

Send flowers to the Nicolozakes family.