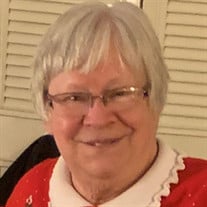 Betty I. Mackley, 75, of Cambridge, passed away Saturday, August 7,2021, at Altercare of Cambridge after fighting a brave battle with cancer, surrounded by her loving family. She left her earthly home to be with her Savior, Jesus, in Heaven. She was born January 14, 1946 in Pleasant City, Ohio to Michael C. and Mildred I. (Weaver) Kornokovich. She graduated from Buffalo High School, class of 1963. She was a hard working person her entire life, and was an incredible role model for her family. She went to beauty school and was employed at Deluxe Beauty Salon for many years, while also working at NCR. When NCR left town, she returned to school and became an LPN who dedicated the next 18 years to the Beckett House in New Concord. After her retirement, she stayed busy by becoming an activity director at Cambridge Heights to stay involved in helping others. She was a natural and caring nurse who took such great care of those who needed her. Betty was an avid bowler for many years, participating in tournaments all over the U.S. She was a world traveler, and was able to visit 49 states, only missing Alaska, which was her dream. She was a huge fan of the Cleveland Indians and Ohio State Buckeyes. She was very involved with many area groups and associations, including the Golden Sixties, Hopewell Homemakers, Guernsey County Senior Center, and Millenium Street Rodders. She had many vast interests. She was a member of the Indian Camp Community Church, and was a beautiful testimony to so many people. She leaves behind to mourn her husband of 49 years, Robert D. Mackley Sr, and her children Bob Mackley Jr. (Judy), Brenda Bailey, and Becky (John) Roe. She also leaves her grandchildren Amanda, Eric, Kati, Chris, Kelli, Paige, Haley, and Destaney, and 12 great grandchildren. She was the oldest of 4 siblings, Mary Ann (Jim) Church, James (Yvonne) Kornokovich, and Joseph (Sylvia) Kornokovich, and many nieces and nephews. Betty never met a stranger, and leaves many wonderful friends, and her faithful companion, Darla, who was her right hand dog. She was preceded in death by her parents, an infant daughter Debbie, and a son-in-law, Karl Bailey. Calling hours will be held at Bundy-Law Funeral Home from 3-5 pm and 7-9 pm Friday, August 13, 2021. Funeral services will be held at 11 :00 am, Saturday, August 14, 2021 at the funeral home with Pastors John Neff and Jim Lee officiating. Burial will follow at Guernsey Memory Gardens. In lieu of flowers, donations may be made to the Guernsey County Senior Center at 1022 Carlisle Avenue, Cambridge, Ohio 43725. Betty's online guest book may be viewed and signed at www.bundy-lawfuneralhome.com. The family would like to express their sincere appreciation to the staff at Altercare of Cambridge for their tremendous care and support to Betty and her entire family.

Betty I. Mackley, 75, of Cambridge, passed away Saturday, August 7,2021, at Altercare of Cambridge after fighting a brave battle with cancer, surrounded by her loving family. She left her earthly home to be with her Savior, Jesus, in Heaven.... View Obituary & Service Information

The family of Betty I. Mackley created this Life Tributes page to make it easy to share your memories.

Betty I. Mackley, 75, of Cambridge, passed away Saturday, August...

Send flowers to the Mackley family.