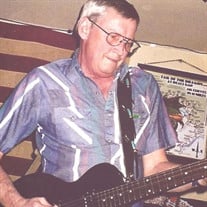 Buddy Charles Gadd Sr., age 72, of Byesville went home to be with his Lord and Savior on Tuesday December 7, 2021 at the Southeastern Ohio Regional Medical Center. He was born on July 17, 1949 in Cambridge, Ohio to the late Walden R. and Clara F. (Phelps) Gadd. He is also preceded in death by a infant brother Wallace; and a brother-in-law Chuck Scott. He was a 1967 graduate of Meadowbrook High School where he was a member of the National Honor Society. He was a talented musician and enjoyed playing in various bands. He lived in Middle Tennessee for many years and he often referred to it as "God's Country". Buddy loved the Lord and reading his Bible. He also was a faithful follower of Pastor Allen Jackson, World Outreach Church in Murfreesboro, Tennessee. Buddy is survived by his children Buddy Jr. (Kelia) Gadd of Florida, Kevin (Holly) Gadd of Cambridge, Angela (Brad) Douglas of Cambridge, Ali (Nick) Humphrey of Tennessee, and Jacob (Grace) Gadd of Tennessee, mother of his children Sue Davis and Micker Gadd, 16 grandchildren, 10 great grandchildren, two brothers Thomas Jacob (Marcia) Gadd, and Patrick Gadd, four sisters Cindy (Jerry) Teter, Jan (Bob) Nelson, Denise (Johnny) Carson, and Sharon (Rodney) Gibs, and many nieces and nephews and close friends. A celebration of life for family and friends will be held at the Byesville VFW on Friday December 10, 2021 from 2:00 to 6:00 PM. Buddy recently wrote this testament to his life. I've often asked just for a message as He passes over me while I sleep. Now He tells me loud and clear, "it's time to come home". What an amazing life I have lived. Talented and bright children, grandchildren, and great grandchildren- so blessed. Know I love y'all and know I love God, Just Buddy. On-line condolences can be sent to the family at www.bundy-lawfuneralhome.com.

Buddy Charles Gadd Sr., age 72, of Byesville went home to be with his Lord and Savior on Tuesday December 7, 2021 at the Southeastern Ohio Regional Medical Center. He was born on July 17, 1949 in Cambridge, Ohio to the late Walden R. and Clara... View Obituary & Service Information

The family of Buddy Charles Gadd Sr. created this Life Tributes page to make it easy to share your memories.

Send flowers to the Gadd family.