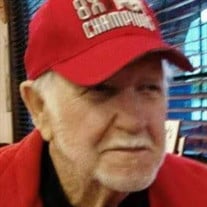 Carl L. Allen, 92 of Lore City, Ohio went to be with the Lord, passing peacefully in the early morning hours on Saturday February 27, 2021. He was born October 25, 1928 to Roy and Doris (Wood) Allen on the family farm which was situated near the ranger's station of Salt Fork State Park. Later in life once that area became a park, the farm was moved across the road from the park entrance on RT 22. Carl planted many of the pine trees in the park across the lake from the ranger's station. He was a local historian for the Salt Fork area providing pictures and information on the area. Carl was a graduate of Madison High School. He was very athletic and played basketball through high school. He was an avid basketball fan and could be found cheering the Madison and Buckeye Trail basketball teams throughout his life. He was one of the nicest and hardest working people you would ever meet. He ran the family farm while working at the Cambridge State Hospital as security and a Physical Tech II. He retired from the State Hospital after 31 years and continued working the family farm as long as he was physically able. Carl led a life that was to be celebrated. Hardworking, funny, and compassionate were just a few words to described this great man. He had a great sense of humor and overall great personality. Carl taught many valuable lessons that will last a lifetime and beyond. Thank you Carl for all the love, life lessons, and the laughs. You will be greatly missed. Preceding him in death were his parents, his first wife of 40 years Margaret "Lou" Allen, a son Jeff Allen, a brother Lorain Allen, and 2 sisters Alice Mitchell and Lois Cronin. He is survived by his second wife Joyce D. (Mitchell) Allen of the home and whom he married on 11/10/1990, 4 children, Mark W. (Vicki) Allen of Lore City, Debbie Grant of Findlay, Brent (Jill) Allen of Lore City, David (Lisa) Allen of Zanesville, 3 stepchildren Beth (Mike) Schafer of Urbana, Debbie (Matt) Boylan of Reynoldsburg, David (Misty) Stillion of Kipling, grandchildren Jennifer Grant, Clayton (Tricia) Allen, Andrea Grant, Carly Grant, Alex Allen, Myranda Allen, Ethan (Megan) McJessy, and Luke Allen, step-grandchildren Charles "Chuck" (Allie) Sylvis, Christopher (Erica) Sylvis, and Paige Boylan, 14 great grandchildren, 6 step great grandchildren, a brother-in-law Jack Mitchell of Washington State, and several nieces and nephews. Bundy-Law Funeral Home will be handling the arrangements with calling hours on Tuesday March 2 from 2:00 to 4:00 and 6:00 to 8:00. Funeral services will be Wednesday March 3 at 1:00 PM at the funeral home with Pastor Jeff Bergeson officiating. Burial in Northwood Cemetery. On-line condolences can be sent to the family at www.bundy-lawfuneralhome.com.

Carl L. Allen, 92 of Lore City, Ohio went to be with the Lord, passing peacefully in the early morning hours on Saturday February 27, 2021. He was born October 25, 1928 to Roy and Doris (Wood) Allen on the family farm which was situated near... View Obituary & Service Information

The family of Carl L. Allen created this Life Tributes page to make it easy to share your memories.

Send flowers to the Allen family.