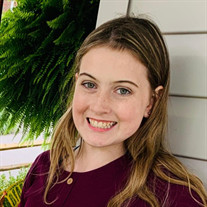 Life can be unfair, and the family and friends of Carys Singler learned that when she lost her battle with brain cancer on February 22, 2022. Carys was the daughter of Jody and Amy Singler. Carys was smart–she had hoped to be a pediatric neuro-oncologist– but also ornery, and could be a “sassy pants”, at times. Most of all, she was straight-forward and had no time for pettiness. She could demolish a person with her patented, withering stare.She rarely expressed self pity about her condition. Once, after she and her Mam, Sue, had been reflecting on her illness, she dried her tears and said, “That’s enough of that; we have to fix dinner.” She enjoyed spending time with her grandparents. When she wasn’t helping her Mam cook or bake, she was the card shark who loved to beat her Pap, Duryl, at card games. She liked to go to her Papaw Ron and Mamaw Becky’s house–especially for their annual Easter egg hunt. Although she would never admit it, she adored her brothers, Dylan and Aidan. She was a fierce competitor when they played Guitar Hero. When she lost her ability to speak, she messaged her mother that she missed her voice, but missed arguing with her brother, Aidan, the most. Her parents, Jody and Amy, were her “rocks”. Although she was somewhat a Daddy’s girl, she and her mother shared a bond that was strengthened by the time they spent together through numerous hospital stays, doctors’ visits, and chemo treatments. Jody and Amy made sure to do the things she loved through her final months. Carys was an animal lover. On the days she felt her worst, she found comfort cuddling with her beloved yorkie, Sammy. She took care of her chickens, Autumn, Trinity, and Jackie, who were named after fellow cancer patients. She spent hours with her dad on the Razor checking on and keeping count of the wildlife near their farm. Through her journey, she was shown much support from her Buckeye Trail Warrior family. Jenny Legats, Mandy McGlumphy, and Bethany Blankenship, along with others too numerous to list, went above and beyond in their efforts to help Carys and her family. Their kindness is deeply appreciated. Her fellow Warriors, Kat Meadows and Emily Crosby, shared her highs and lows with unwavering friendship. The parishioners and pastors at Ninth Street Methodist Church provided support and prayers weekly; they were her church family. She looked forward to going to Between Times on Tuesdays. Carys loved spending her summers at the pool and her favorite lakes with her Mam and cousins, Andrew , Madeline, and Nico–who were more like her bonus brothers and sister. She had a bonus mom in her cousin, Maggie, who called her Bean and loved to spoil her. She also looked forward to Christmas at her grandparents’ homes with her Picktown cousins Isaac, Sydney, Braden, and Colson Hopkins. Carys was predeceased by her grandfather, Terry Singler. She is survived by her parents; her brothers, Dylan and Aidan Singler, and Adam Lehman; her grandparents, Marie Scott, Duryl and Sue Mallett, Ron and Becky Hopkins; aunts and uncle, Kelly Rugg, Cindy Ogle, and Rich and Shannon Hopkins. She is also survived by numerous cousins and great aunts and uncles. A special thanks to Community Hospice for their amazing care of Carys. Carys would not want to be remembered as the girl who died from cancer; but rather, the Warrior who fought against insurmountable odds and prevailed for six years. We should all be that strong. Services will be at Ninth Street United Methodist Church on Saturday, March 5, 2022. Calling hours will be from 11:00 to 3:00, followed by the service at 3:00 with the Reverend Karen Rawlins officiating. Donations to the Carys Singler Memorial Scholarship can be made at Peoples Bank, Cambridge.

Life can be unfair, and the family and friends of Carys Singler learned that when she lost her battle with brain cancer on February 22, 2022. Carys was the daughter of Jody and Amy Singler. Carys was smart&#8211;she had hoped to be a pediatric... View Obituary & Service Information

The family of Carys R. Singler created this Life Tributes page to make it easy to share your memories.

Life can be unfair, and the family and friends of Carys Singler...

Send flowers to the Singler family.