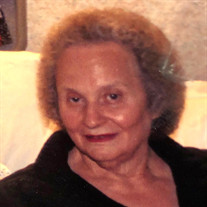 Catherine M Clark (Mingione), 89, of Friendship Drive New Concord Ohio died February 17th, 2019 at her home. She was born October 30th, 1929 in New Castle (Mahoningtown), PA and was the daughter of the late Domenick and Angeline (Gangliero) Mingione. She married the love of her live Willard (Tootie) Clark on June 15th, 1950 in Mohoningtown, PA unfortunately he passed away August 30th, 2010. Mrs. Clark was a wonderful mother, grandmother, and great-grandmother. She loved to talk about the old days with her family and friends. She knew the ending to every movie even if she never had seen it. She laughed a lot, talked a lot, but most of all was loved by many. She had one hobby that lasted over her life time which was playing Bingo. She loved to play Bingo and had many Bingo friends that she thought of as family. In her early years she helped her mother at the Columbus Club serving meals to the members, a few years later worked a short time at the local hospital as a nurse’s aide, and then spent the rest of her years as a home maker. Surviving by her three children and daughter-in-law; Willard D. (Nancy) Clark of Florida, Angie “Sissy” (Curt) Foraker of Cambridge, Joan (Tim) Cox Bolivar, and Marsha Clark of Strasburg; 8 grandchildren, Hope Foraker (Josh), Ricky Clark (Amanda), Cody Foraker (Amanda), Carly (Jeromy) Mayle, Emma Clark, Hayden Cox, Joey Cox, and Katie Cox; 2 great-grandchildren; Liam Foraker, Ariah Devore, and baby Mayle on the way. One sister Mary (Mingione) Voucolo of Mahoningtown, PA. In addition to her parents and husband, she was preceded in death by her son Rick Clark, one brother Domenick (Junior) Mingione, and two grandchildren Christopher and Billy Joe Foraker. Calling hours will be from 3 to 7 p.m. Friday February 22nd at Bundy Law Funeral Home in Cambridge, Services will be Saturday February 23rd at 10 am and following services Katie will be laid to rest beside her husband at Northwood Cemetery in Cambridge. Katie’s online guest book may be viewed and signed at www.bundy-lawfuneralhome.com.

The family of Catherine M. Clark created this Life Tributes page to make it easy to share your memories.

Send flowers to the Clark family.