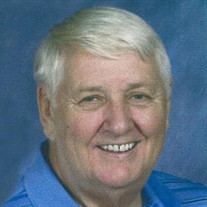 Ed Morland, a beloved husband, father, grandfather, sibling and friend passed away peacefully at his home on February 27, 2022 at age 84 after an extended illness. The family is grateful to Hospice of Guernsey for their wonderful care during his last few months. Ed was born on May 11, 1937 at Ava, OH to the late Charles and Margaret (Gamary) Morland. He was a 1955 graduate of Pleasant City High School. He was a starter on the Pleasant City Tiger’s basketball team that played in the state tournament. After graduation and one semester at Marietta College, he joined the Navy where he was stationed in Panama for two years. Following his military service, he attended Ohio University branch at Zanesville, OH while working at RCA. He began his teaching career on a Cadet certificate in Guernsey County. He later served as an elementary principal in the Newark City Schools and the Caldwell Exempted Village School District. He ended his career after 37 years as Assistant Superintendent at Caldwell. Ed married Frances “Fran” Morland on June 18, 1960 and together they built a beautiful life and family. Spending time with Fran and his four children and now their families is what Ed enjoyed the most. He was so proud of his family and would brag about them any chance he had. After their retirement, Ed and Fran enjoyed world travels which took them to all 50 states, Canada, Mexico, Central America, British Isles, Europe, China, Russia, Australia, New Zealand and the Caribbean. They enjoyed yearly visits to Hilton Head and Myrtle Beach, SC as Ed loved spending time at the ocean. He enjoyed road trips to Cleveland to watch the Indians and cheering the Browns and Ohio State Buckeyes at home. However, his favorite travels were the four Family Cruises that he and Fran took with their children and grandchildren. Ed loved going to flea markets and shopping for antiques. He was a regular playing Bingo at the GCSCC. He was a 50 year member of Acme Lodge #554 F&AM, Newark,OH and Guernsey Chapter #211 OES, Cambridge. Ed was preceded in death by his parents, brother John Morland, sister Diane Morland, and granddaughters Haley Griffiths and Lindsey Harrison. He is survived by his wife of 61 years, Frances (Laughman) Morland, his children, David (Martha) Morland, Zanesville, OH, Melanie (Chris) Harrison, Baltimore, OH, Greg Morland, Gahanna, OH and Kristi (Rob) Griffiths, Powell, OH; his grandchildren, Jeremy (Amy) Morland, Sean Morland, Mitchell and Abby Griffiths, Connor, Trent and Bryan Harrison. He leaves his siblings Joan Gress, Eileen Colarusso, Cheryl Howard, Vandalia, OH, Vera (Ron) Harra, Cambridge, OH, Betsy (Edward) Timar, Haddonfield, N.J. and Jerry (Jennifer) Morland, Camden, OH and many nieces, nephews and cousins. There are no calling hours and the family will observe a private funeral service with Wes Jones officiating. Burial will be at Old Washington Cemetery. In lieu of flowers, memorial contributions may be made to the Old Washington Presbyterian Church, P.O. Box 267, Old Washington, OH 43768 or to Hospice of Guernsey, P.O. Box 1165, Cambridge, OH. Ed's online guest book may be viewed and signed at www.bundy-lawfuneralhome.com.

Ed Morland, a beloved husband, father, grandfather, sibling and friend passed away peacefully at his home on February 27, 2022 at age 84 after an extended illness. The family is grateful to Hospice of Guernsey for their wonderful care during... View Obituary & Service Information

The family of Charles Edward "Ed" Morland created this Life Tributes page to make it easy to share your memories.

Send flowers to the Morland family.