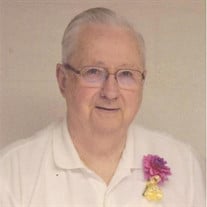 Charles A. Upton, age 88 of Cambridge, passed away on Wednesday, November 27, 2019 at his home. He was born on June 12, 1931 in Cambridge, a son of the late William Teutonic Upton and Hazel Dell (Hammond) Upton. Mr. Upton began working as a teenager at the Kroger Store in 1947 then left for the service in 1950. He returned to Cambridge in 1954 from the Army and worked another 25 years at Krogers and 10 years for Pennyfare. He started the Cambridge Glass Club which later became the National Cambridge Collectors Club. He was a member Mt. Hermon Presbyterian Church for over 65 years. He was a 32 degree Mason and a member of the Guernsey Lodge #66 F& AM, and the Scottish Rite Valley of Cambridge. He also enjoyed working genealogy. Charles was preceded in death by: his parents; his wife of 65 years Mary Alice (Porter) Upton, on August 20, 2019; a son-in-law Dale Saft; a brother Richard “Dick” Upton and two sisters, Thelma Thomas and Marjorie Welch. Surviving are: three daughters, Carolyn Saft, Barbara (Rocky) Menzie, and Deborah (Ross) Nelson, a sister Mary Ellen (Gary) Larrick; grandchildren, Kelly (Jeff) Landin, Craig Saft, Adam Menzie, Kaci Menzie Lowe, Hannah Nelson, Cody (Jenna) Nelson; great grandchildren, Jordan Landin, Wyatt Landin, Gage Lowe, Graysen Lowe, Grady Lowe, Caleb Menzie, Jaxon Nelson, and Casen Nelson; and several nieces and nephews; and special friends and caregivers Barb (Larry) Wilson. Visitation will be at Bundy-Law Funeral Home on Monday, December 2, 2019 from 3 pm to 6 pm and on Tuesday from 12 pm to 1 pm with his service to begin at 1 pm. Rev. Charles Hutchison will officiate the service with burial to follow in Mt. Hermon Cemetery. Military Graveside Rites will be conducted by the Guernsey County Veterans Council. Memorial donations may be made to Hospice of Guernsey at P.O. Box 1165 Cambridge, Ohio 43725. Charles online guest book may be viewed and signed at www.bundy-lawfuneralhome.com.

Charles A. Upton, age 88 of Cambridge, passed away on Wednesday, November 27, 2019 at his home. He was born on June 12, 1931 in Cambridge, a son of the late William Teutonic Upton and Hazel Dell (Hammond) Upton. Mr. Upton began working... View Obituary & Service Information

The family of Charles A. Upton created this Life Tributes page to make it easy to share your memories.

Charles A. Upton, age 88 of Cambridge, passed away on Wednesday,...

Send flowers to the Upton family.