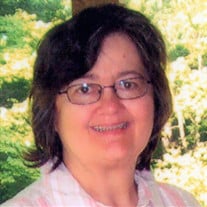 Connie Lou Bloom, age 72, of Guernsey County, Ohio passed away peacefully in her sleep at home on Wednesday, August 14. She was born in Tacoma, Washington on December 13, 1946 to the late Samuel D. Jamison and Arlaine (Nehser) Leicht. Connie graduated from Sumner High School in Sumner, Washington in 1966. Shortly thereafter, while at a local Tacoma roller skating rink, she was blessed to meet the love of her life, young army veteran Irvin W. Bloom of Tuscarawas County, Ohio. A few months later, on February 17, 1967, they tied the knot at the Nazarene Church of Puyallup, Washington. From that day on, they were like two peas of the same pod, always together in support of each another. Over the years, they built a thriving hand-made ceramic business in which, because of Connie’s masterful artistry and steady hand, sold countless pieces across the country, with some even showcased in a store in Beverly Hills, California. Her talents also extended to the kitchen, making delicious items that were highly sought after at local festivals and during the holidays, with one of her most noted being her Butt Salad—an oddly pungent concoction that became a famous treat for many, and for some, a bit more infamous one. However, as talented as she was, her greatest pride was giving birth to her children. A devoted mother, Connie enjoyed spending time outdoors with her family, especially camping, fishing, clam digging, or just traveling the country. These educational adventures with her children eventually evolved into her becoming a Brownie Troop Leader, serving as an important mentor for young girls in her community. Connie is survived by her loving husband of 52 years, Irvin W. Bloom, her four children Kimberly, Shawn, Daniel, and Heather, as well as eight grandchildren and three great grandchildren. Her love, humor, and laughter will be greatly missed by all that knew her. Calling hours will be on Thursday, August 22nd from 4:00 to 6:00 p.m. at Bundy Law Funeral Home in Cambridge, Ohio. A Celebration of Life service will begin at 6:00 p.m. with pastor Clayton H. Coffey officiating. Connie’s online tribute page/guest book wall may be viewed and signed at www.bundy-lawfuneralhome.com.

Connie Lou Bloom, age 72, of Guernsey County, Ohio passed away peacefully in her sleep at home on Wednesday, August 14. She was born in Tacoma, Washington on December 13, 1946 to the late Samuel D. Jamison and Arlaine (Nehser) Leicht. Connie... View Obituary & Service Information

The family of Connie Lou Bloom created this Life Tributes page to make it easy to share your memories.

Send flowers to the Bloom family.