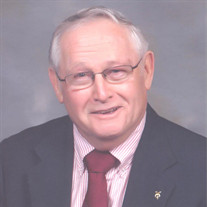 D. “Glenn” Nicholson, age 83 of Cambridge, passed away on Saturday, October 6, 2018 at his home. He was born on February 18, 1935 in Jerusalem, Ohio a son of the late George W. Nicholson and Bertha (Finch) Nicholson. Glenn was a 1953 graduate of Cambridge High School. He worked all his life in the equipment business. He retired from Case IH in sales and service after 25 years. He was a member of: the Center United Methodist Church, the County Methodist Men’s Group, the Cambridge Lions Club, the Guernsey Lodge 66 F&AM, the Scottish Rite and the Aladdin Shrine. He was an active volunteer for Grace Pantry for many years. He leaves his wife of almost 65 years, Norma Ruth (Miller) Nicholson; their two daughters, Sue Ellen (Ken Brushaber) Nicholson of Columbus, and Karen Jo (John) Dunn of Arlington, Mass.; and several nieces and nephews. Glenn is preceded in death by his parents and three brothers, John, Paul and Earl Nicholson. Visitation will be at Bundy-Law Funeral Home on Tuesday, October 9, 2018 from 4 to 8 pm. with Masonic services at 7 pm. and a Lions service at 7:30 pm. Glenn’s funeral service will be held on Wednesday, October 10, 2018 also at Bundy-Law at 11 am. Pastors David Mansperger and Matt Wilson will officiate the service with burial to follow in Center Cemetery. In lieu of flowers donations may be made to the Shriner’s Children’s Hospital 2900 Rocky Point Drive Tampa, FL 33607 or to Center United Methodist Church 11026 Cadiz Road, Cambridge, OH 43725. Glenn’s online tribute wall may be viewed and signed at www.bundy-lawfuneralhome.com.

The family of D. Glenn Nicholson created this Life Tributes page to make it easy to share your memories.

D. “Glenn” Nicholson, age 83 of Cambridge, passed away on Saturday,...

Send flowers to the Nicholson family.