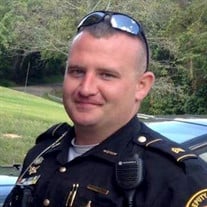 Dale W. Resor, age 34 of Freeport, passed away on Tuesday, December 25, 2018 as the result of an auto accident. He was born on December 16, 1984 in Richmond, Indiana, a son of Gary R. Resor and the late Lynn Gordnier Resor. Dale was a 2003 graduate of Buckeye Trail High School. He worked as a patient tech. at Southeastern Med for a couple years before becoming a corrections officer at Noble Correctional Institution. He received his O.P.O.T.A. at Zane State in Zanesville. He then became a deputy for the Guernsey County Sheriff’s Office for the next 7 years. Most recently he was a part time deputy for Harrison County Sheriff’s Office and also a part time Fire Fighter and Advanced E.M.T. for Hopedale Fire Department. Dale was a member of the F.O.P, the Guernsey Lodge 66 F&AM, still remained a volunteer at Moorefield Township Volunteer Fire Department. He also volunteered at Byesville and Lore City Fire Departments and received numerous recognitions and awards through his years of community service. He leaves behind: his father Gary R. Resor of Cambridge; his wife Melissa Resor and two sons, Ethan and Jacob; his brother Ryan (Jennifer) Resor; his sister Erin (Shannon) Rieder; his grandmother Wilma Resor all of Cambridge and nephews and nieces, Gavin, Cashtin, Zyler, Treyson, Gaige, Conner, Lillian and Ella; his mother and father-in-law David (Skip) Wilson of Caldwell; a sister-in-law Bethany (Nels) Lundquist; and several cousins. Preceded in death by: his mother Lynn Gordnier Resor; grandparents, Raymond E. Resor, William H. and Lillian L. Gordnier; and three uncles, Jaye Resor, Douglas Resor and Shelly Gordnier. Visitation will be on Sunday, December 30, 2018 at Bundy-Law Funeral Home from 1 to 7 pm with a Masonic Service at 6:30 pm. Funeral Services will be on Monday, December 31 at 1 pm with visitation prior from 12-1 pm. Pastor Larry Copley will officiate the service with burial to follow in Old Washington Cemetery. In lieu of flowers, donations may be made to his boys accounts at P.N.C. Bank Cambridge. Dale’s online tribute wall may be viewed and signed at www.bundy-lawfuneralhom.com.

The family of Dale W. Resor created this Life Tributes page to make it easy to share your memories.

Send flowers to the Resor family.