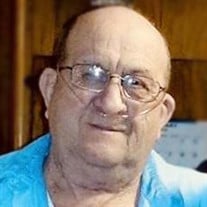 Dale Eugene Ward, age 78 of Cambridge, passed away at his home on Saturday, July 13, 2019 surrounded by his family. He was born on May 8, 1941 in Hendrysburg, Ohio a son of the late Donald W. Ward and Mary Louise (McNichols) Ward. Dale retired from the former Cambridge State Hospital in 1993 with over 30 years of service. He was also the County Plumbing Inspector for many years as well. Dale was a member of the First Baptist Church and the Cambridge Kiwanis Club. He worked many projects with the Kiwanis including setting up the Sno Cone trailer and helping operate it at the fireworks for may years. Since 1979 he was a committee member with Boy Scout Troop 560. Dale had many positions in the scouting program throughout his life. He was membership chairman with the district and started many new packs throughout five counties. Dale also helped with many projects at the Boy Scout Camp and mowed at the camp and Zanesville office for several years. His last position was Cub Master with Pack 547. Dale loved working in the Scouting Program and made many friends. Dale is survived by: his wife Sharon Ann (McCleary) Ward, whom he married on May 27, 1963; their children, Deborah Ward, Bill (Kelli) Ward and Bob Ward; grandchildren, Renee (Greg) Curts, Michael Ward (Kristina Smith), Amanda Ward (Scott Johnson), Kaci Rossiter (Justin Haught) and Tyler Hardy (Brooke Showalter); great grandchildren, Bailey Curts, Hunter Curts and Emma Haught; a sister Linda Kerner; a brother Larry Ward; a brother-in-law Floyd (Ruth) McCleary and a sister-in-law Linda McCleary; and several nieces and nephews. Visitation will be on Tuesday, July 16, 2019 at Bundy-Law Funeral Home from 2 to 4 and 6 to 8 pm. His funeral service will be held at 11 am on Wednesday also at Bundy-Law with Pastor Jon Lobos and Pastor Dan Milburn officiating. Burial will follow in Guernsey Memory Gardens. Memorial donations may be made to the Muskingum Valley Council at 734 Moorehead Avenue Zanesville, Ohio 43701 or the First Baptist Church 136 N. 8th Street Cambridge, Ohio 43725. Dale’s online tribute wall may be viewed and signed at www.bundy-lawfuneralhome.com.

Dale Eugene Ward, age 78 of Cambridge, passed away at his home on Saturday, July 13, 2019 surrounded by his family. He was born on May 8, 1941 in Hendrysburg, Ohio a son of the late Donald W. Ward and Mary Louise (McNichols) Ward. Dale... View Obituary & Service Information

The family of Dale Eugene Ward created this Life Tributes page to make it easy to share your memories.

Dale Eugene Ward, age 78 of Cambridge, passed away at his home...

Send flowers to the Ward family.