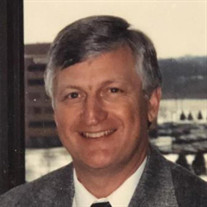 Don Ross Shimp, age 75 of Cambridge, passed away on Wednesday, June 24, 2020 at his home. He was born in Cambridge, on August 31, 1944 a son of the late Frederick I. Shimp and Mary Ellen (Tracey) Shimp. Mr. Shimp was the president of his 1962 class of Cambridge High School. He was drafted into the Army and served in the Vietnam War, where he was awarded numerous medals including the Sharpshooter Award. After the service, he went on to the University of Cincinnati to receive his bachelor’s degree. He retired from GTE as a manager after many years of service. Don attended the Buckeye Boy State in 1961, he was a Life Member of the American Legion in Cambridge and very active in many of the Cambridge area clubs. Most recently he was considered the mayor of Fish Hawk Trails in Lithia, Florida. Don is survived by: a brother Fred W. (Deb) Shimp of Medina; a sister Carol (James) Davis of Cambridge; nieces and nephews, Doug (Tammy) Green, Angie Shimp, Eric (Susen) Green, Mick (Jill) Shimp, Christine (Bill) Mickey, Marty Shimp, Mindy (Rob) McCoy, Janell (Melvin) McDaniel, Jocelyn (Randy) Zandron, Jeff (Glenda) LaRue and Heather (Troy) Gerspacher; the Champ family and Tracey family; the Cambridge High School class of 1962; his special neighbors Luke (Chris) Diruzza; his special caregiver Wayne Prahalad and many many other friends. He is preceded in death by: his parents and a brother Paul M. Shimp. Visitation will be from 3 to 7 pm on Monday, June 29, 2020 at Bundy-Law Funeral Home. Service will be held on Tuesday at 11 am also at Bundy-Law with Rev. Larry McKim officiating. Burial will follow in Northwood Cemetery with Military Graveside Rites performed by the Guernsey County Veterans Council. In lieu of flowers, donations may be made to The ALS Association Central & Southern Ohio Chapter 1170 Old Henderson Rd Ste 221 Columbus OH 43220 or to the Cambridge City Band. Don’s online guest book may be viewed and signed at www.bundy-lawfuneralhome.com.

Don Ross Shimp, age 75 of Cambridge, passed away on Wednesday, June 24, 2020 at his home. He was born in Cambridge, on August 31, 1944 a son of the late Frederick I. Shimp and Mary Ellen (Tracey) Shimp. Mr. Shimp was the president of... View Obituary & Service Information

The family of Don Ross Shimp created this Life Tributes page to make it easy to share your memories.

Don Ross Shimp, age 75 of Cambridge, passed away on Wednesday,...

Send flowers to the Shimp family.