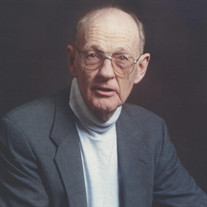 Duane E. McDonald Sr., age 87 of Cambridge, passed away on Thursday, April 15, 2021 at Astoria Place of Cambridge. He was born on April 14, 1934 in Akron, a son of the late Donald E. McDonald and Margaret Elizabeth (Cunningham) McDonald. Duane was an ardent sports fan who loved the Buckeyes, Reds and Dallas Cowboys. He enjoyed watching about any kind of sport. Playing softball and coaching baseball, was a great bowler and loved spending time golfing with his son, grandson and friends. For 30 years he refereed high school football, many a Friday night was spent on the football field. An expert crossword puzzler his entire life, he could finish a Sunday New York Times crossword in record time! Any trivia question was within his knowledge and loved using odd and uncommon words, just to flummox you. In the 60’s, he got involved in community theater acting in several plays with a real passion for musicals like “Oklahoma,” “South Pacific”, or “The Music Man”. He would suddenly break out in song to “Some Enchanted Evening” much to the chagrin of his listeners. To celebrate occasions, like birthdays, retirement or weddings, he composed poems which he proudly read at the events. Having a mighty sweet tooth, he never met a donut he didn’t like which went nicely with his bottomless cup of coffee which was constantly with him. Duane was a unique and quirky guy who will be missed. He always said the most important things in life are: family, faith and friends. Amen to that! Duane proudly served his country in the U.S. Naval Reserves from 1952 to 1960. He was an insurance adjuster for Motorist Mutual Insurance Co and had also worked at Southeastern Printing. He is preceded in death by his wife Garey Lou (Baker) McDonald on July 13, 2003, they were married on June 4, 1954. Besides his wife and parents, he was also preceded in death by a brother James McDonald. Surviving are: daughter Colleen Kay (Cliff) Madewell of Cambridge,; two sons, Duane E. (Brenda) McDonald Jr. of Cincinnati and William D. (Donna) McDonald of California; three grandchildren Amanda Lea McDonald, McKenzie Kay (Adam) McDonald and Duane E. III (Maura) McDonald; a great granddaughter Macy Valentine McDonald; a sister Marilyn Jean (Chris) McCormick of Cambridge; and a sister-in-law Lil McDonald of Cambridge. Visitation will be on Monday, April 19, 2021 at Bundy-Law Funeral Home from 11 am to 1 pm with the service beginning at 1 pm. Pastor Tina Gallaher will officiate with burial to follow in Northwood Cemetery. In lieu of flowers, donations may be made to Guernsey County Senior Center at 1022 Carlisle Avenue Cambridge, Ohio 43725. Duane’s online guest book may be viewed and signed at www.bundy-lawfuneralhome.com.

Duane E. McDonald Sr., age 87 of Cambridge, passed away on Thursday, April 15, 2021 at Astoria Place of Cambridge. He was born on April 14, 1934 in Akron, a son of the late Donald E. McDonald and Margaret Elizabeth (Cunningham) McDonald.... View Obituary & Service Information

The family of Duane E. McDonald Sr created this Life Tributes page to make it easy to share your memories.

Send flowers to the McDonald family.