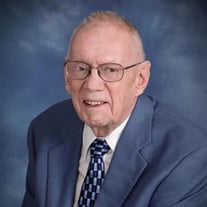 Emerson Glenn Arnold of Cambridge passed away Friday, February 25, 2022. He was born on July 5, 1933 to the late Emerson Roosevelt and Mary Margaret (Bear-Breen) Arnold of Middlebourne and later Fairview. Glenn graduated from Old Washington High School in 1951 and Muskingum College in 1955. Upon graduating College, he married Patricia (Pattie) Daniel on July 31, 1955 and shortly after he began his service in the U.S. Army at Fort Reilly Kansas. After returning home from the Military, he continued to work with family at the Home Telephone Company and thus retiring in 1993 from the Alltel Telephone Company. Glenn was a member of the Ninth Street United Methodist Church. He was a Rotarian, serving as President in four clubs. He was a member and Past President of the Pennyroyal Ruritan Club. Those who knew Glenn know that he had an extensive Masonic history. He was a member of Kirkwood Lodge #446 (serving as District Deputy Grand Master of the Grand Lodge of Ohio for the 23rd Masonic District, Past President and secretary of the Past Masters Association of the 23rd Masonic District), Cambridge Chapter #53 RAM, Guernsey Council #74 R&SM, Cambridge Commandery #47 and Allenby Commandery #73 KT of OH, Ohio Priory #18 Knight York Cross of Hounor, Valley of Cambridge A.A.S.R. and received the honorary 33rd on September 27, 1988 plus served as their Executive Secretary. He also belonged to many other masonic organizations He is preceded in death by his parents and Brother Howard Arnold. He is survived by his loving wife of 66 years Patricia, daughters Cynthia (Richard) Griffith Charlotte (Keith) Kolke and Charlene (Bryan) Panovich. Grandsons Dan Arnold, Kevin (Sara) Arnold, Cooper (Britlee) Kolke, Curtis and Clayton Kolke, Connor (Mackenzie) and Brennon Panovich. Great Grandsons Kevin and Forrest Arnold. Sister in-laws Darcy (Cabot) Lodge and Bertha Arnold. Visitation will be held at Bundy-Law Funeral Home on Monday, February 28, 2022 from 5-8 pm with Masonic Services at 7 p.m. Service will be held on Tuesday, March 1, 2022 at 11 am at Bundy-Law Funeral Home with Pastor Karen Rawlins officiating . Burial will follow at Guernsey Memory Gardens with Military Honors. The family extends a special Thank-You to Hospice of Guernsey and caregivers, Patty and Leslie. Memorial Contributions may be made to The Valley of Cambridge Learning Center, 935 Wheeling Ave., Cambridge, OH 43725. An on-line guest-book may be signed at www.bundy-lawfuneralhome.com.

The family of Emerson Glenn Arnold created this Life Tributes page to make it easy to share your memories.

Send flowers to the Arnold family.