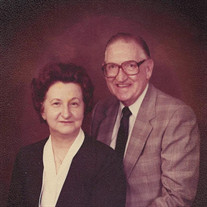 Emma Faye (Bonnell) Culbertson, 96 of Cambridge, passed away on Wednesday, August 25, 2021 in Cambridge, Ohio. She was born February 3, 1925 to late Homer Wilbur Bonnell and Sylvia Bella (Tedrick) Bonnell on the Charles Parker Farm, Jefferson Township, Guernsey County. She graduated from Brown High School in 1943 and attended office training in Columbus, Ohio. Throughout her career, she worked for Continental Can, Cambridge Glass, Cambridge Molded Plastics and retired from the Southeastern Ohio Regional Medical Center in 1991. After retiring she continued to work for Area Agency on Aging. Preceding her in death are her parents, husband Robert Francis Culbertson, whom she married on September 15, 1951; a son Robert F. Culbertson II; two granddaughters; five brothers, Chester, Robert, Harold, Virgil and Eugene; and two sisters, Audrey and Vera. Survivors include: two sons, Robin Scott Culbertson of Norton, Ohio and Jon Mark Culbertson of Kissimmee, Florida; a granddaughter Kelsey Lynne Culbertson of Hartford, Connecticut; a grandson Tyler Scott Culbertson of Sylvania, Ohio; a favorite niece and her husband Marcia and Howard Winnett of Cambridge; great nieces, Jennifer (Tim) Denniston of Granger, Indiana and Kristin Winnett of Cambridge; and nephews, Joe Culbertson and family and Jack Bonnell and family. In keeping with Faye’s wishes, there will be no services at this time. Private interment will take place at Northwood Cemetery. In lieu of flowers, donations may be made to Hospice of Guernsey at P.O. Box 1165 Cambridge, Ohio 43725. Her online guest book may be viewed and signed at www.bundy-lawfuneralhome.com.

The family of Emma Faye Culbertson created this Life Tributes page to make it easy to share your memories.

Send flowers to the Culbertson family.