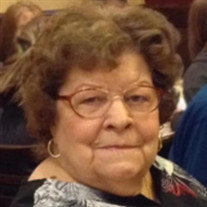 Evelyn L. McManus, 91, of Cambridge, passed away Saturday, December 25, 2021, at Morrison House in Zanesville. She was born March 13, 1930, in Cambridge, to the late Lawrence G. and Edna L. Moffatt Winnett. She was also preceded in death by her husband of 62 years, Roger, a brother, Wilmer “Pee Wee” Winnett, a son-in-law, Ron Marshall, granddaughter, Lori Long, and great-grandson, Blake Long. Evelyn attended Cambridge High School and Cambridge Business School. She worked as a realtor and as a secretary. She spent 18 years as the secretary/treasurer for Boyd Electric and 5 years for the Ohio State Parks. When her children were in school she served as an officer and volunteer for both the PTA and the Bobcat Boosters. In addition to her work outside of the home, she was “chief cook and bottle washer” for her family. She loved to cook, and her family and friends reaped the benefits. She always made sure that her dinners were enough to feed her family and the friends who often came home with them. At times, it seemed she fed half of the Bobcat football team. Long after her family had grown, she still fixed massive family dinners on Thursday nights and Sunday. Her other passion was baking, and at Christmas, she would bake over 200 dozen cookies to be eaten by family, friends, and neighbors. Her strawberry and carrot marzipan were beyond comparison. Evelyn enjoyed all sports, and always had a game or a race on TV. She loved the Buckeyes, the Browns, the Indians, the Reds, Nascar, and Indy racing. She and Roger attended many races at Indy, Daytona, Michigan, and several other tracks. She was also an avid bowler, starting in the Housewives League in the 1950’s and continuing for over 40 years. Her other loves were camping and traveling, and she and Roger visited many areas with their friends, Charlie and Becky Tedrick, and Joe and Joyce Stavely. Naples, Florida, Gatlinburg, and Branson were among their favorite destinations, and Dogwood Acres was where they camped for many years. Evelyn is survived by her children, Sue (Duryl) Mallett, Sandy (Ron) Marshall, Jo Ellen (Jeff) Boyd, Roger (Mary Ann) Mc Manus, Bob (Cindy) McManus, and honorary son, Bob Walker; grandchildren, Rich (Shannon) Hopkins, Amy (Jody) Singler, Chad (Liz) Marshall, Allison (Steve) Scott, Maggie (Eric) Schlosser, Erin Boyd, Lorraine (Kevin) Meek, Ryan (Kristin) McManus, Jared, Jenelle, Jenna, Denise (Steve) Watson and family, Glenn (Lori) Long and family; great-grandchildren, Dylan, Aidan, Carys, Isaac, Sydney, Braden, Colson, Libby, Ava, Austin, Andrew, Madeline, Blake, Nicholas, Lauren, Deegan, Jillian, Adrienne, Owen, Lily, Katherine, Kayden, Kennedy, her sister-in-law, Bonnie Winnett, nephews, Larry (Jamie), Randy (Karen), Tommy (Sandy) Winnett, and her special friends, Joyce Stavely, Reese and Barb Tipton, Evelyn and Marty Thompson. Calling hours will be Friday, December 31, at Bundy-Law Funeral from 11am to 1pm with the service to follow at 1pm, officiated by Pastor Karen Rawlins. Burial will be in Northwood Cemetery. The family ask that all Covid precautions be followed if attending. In lieu of flowers, memorial contributions can be made to the Guernsey County Senior Citizens Center and Ninth Street Methodist Church. Evelyn's online guest book may be viewed and signed at www.bundy-lawfuneralhome.com.

Evelyn L. McManus, 91, of Cambridge, passed away Saturday, December 25, 2021, at Morrison House in Zanesville. She was born March 13, 1930, in Cambridge, to the late Lawrence G. and Edna L. Moffatt Winnett. She was also preceded in death by... View Obituary & Service Information

The family of Evelyn L. McManus created this Life Tributes page to make it easy to share your memories.

Send flowers to the McManus family.