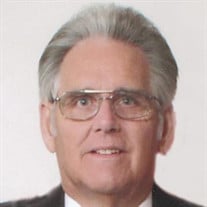 Gary George Edmunds, 75, went home to be with the Lord on January 28th, 2021 in Middleburg, FL, surrounded by family, including his beloved poodle, Dudley. Gary was born in Akron, Ohio on March 8, 1945 to the late George Giles and Ruth Gladys (Woods) Edmunds. He is preceded in death by his brothers Daniel and Edwin Edmunds. Gary graduated from Kenmore High School in 1964 where he played football, sang in the choir, and had a band called “Big Ed and the Skylarks”. He later received an honorary doctorate from Marietta Bible College and a Doctor of Divinity from Mountaineer Bible College. In the 70’s he worked at Rockwell and B&W of Barberton and Hamilton Beach of Byesville OH. Then he retired from Cambridge State Hospital. But in 1976, God called Gary to serve Him in many capacities over the next 40+ years, preaching in nursing homes, starting a church in southern Ohio, where they first met in the family home, eventually moving to a barn. Later, Gary became a full-time Missionary Evangelist to the Appalachian Mountains where he and his wife traveled for many years in their motor home. He loved to preach revival meetings, hold old-fashioned tent meetings, and sing about our Lord while playing his guitar. They served at youth camps and helped in churches by filling-in pulpits, leading congregational singing, the choir, visiting door-to-door or with church shut-ins. After about 30 years, Gary was called to pastor Countryside Baptist Church in Port Washington, OH where he and Judy served. Together they served the Lord for 43 years. Years later, they moved to Florida to work with Amazing Grace Ministry, until his health began to fail. They attended Calvary Baptist in Middleburg, Florida Pastor Ken Pledger. Gary leaves behind his loving wife, Judith (Kamany-Linton) Edmunds of 44 Years, daughters, Julie (Mark) Brock, Tina Linton, Konnie Linton, and Amy (John) Dearie. Grandkids he loved very much, Dylan Brock, Taylor (Darren) Smith, Jesse, Abigale, & Johnathan Dearie, brothers-in-law, John (Donna) Kamany, Leo Kamany, predeceased by Bruce Kamany, special sisters-in-law Jennifer (Joe) Reakes, Susan Jeffries, devoted nieces Allayna Widlits and MontanaRose Jeffries, special nephews and cousins, who made many growing-up memories, and precious nieces, nephews, and faithful friends. A memorial service will be held at 11 AM, with visitation one hour prior, Thursday, February 4th, at, his home church, Bible Baptist Church, 207 5th St., Byesville, OH. The service will also be provided via live stream on Facebook and YouTube https://youtu.be/hTIirFtgEBk. Due to COVID, you are encouraged to attend virtually. Please respect the family by complying to social distance guidelines. Masks are required at the request of the family. Pastor Steve Leathley, Pastor David Jessie and Evangelist George Griffis will preside; interment will follow at Greenlawn Cemetery Chapel, at 3 PM, 2580 Romig Rd. Akron, OH. As an expression of sympathy, donations may be made to Judy to help defray funeral expenses. Gary’s online guest book may be viewed and signed at www.bundy-lawfuneralhome.com. Psalm 116:15 “Precious in the sight of the LORD is the death of his saints.”

Gary George Edmunds, 75, went home to be with the Lord on January 28th, 2021 in Middleburg, FL, surrounded by family, including his beloved poodle, Dudley. Gary was born in Akron, Ohio on March 8, 1945 to the late George Giles and Ruth Gladys... View Obituary & Service Information

The family of Gary George Edmunds created this Life Tributes page to make it easy to share your memories.

Gary George Edmunds, 75, went home to be with the Lord on January...

Send flowers to the Edmunds family.