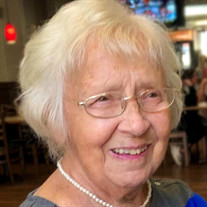 Grace Marie Oliver Donley, age 94 of Cambridge, passed away on Sunday, April 24, 2022 at The Cardinal Place in Cambridge. She was born in Guernsey County on October 2, 1927, a daughter of the late Wilmer Oliver and Anna Mae (Speer) Oliver. Mrs. Donley was a 1945 graduate of Brown High School. She was the owner of Donley’s Hallmark for over 40 years on Wheeling Avenue in Cambridge. She enjoyed seeing and interacting with customers and her employees held a special place in her heart. She was a member of the First Christian Church, where she was also a long standing member of her Sunday School Class. Her competitive spirit shined as she enjoyed golfing, bowling, and playing cards. Her greatest joy in life was spending time with her children, grandchildren and great grandchildren. Grace was preceded in death by her husband Richard Max Donley in 2004, they were married on April 6, 1947. Also deceased are: two sisters, Gladys Smith and Ada Ross; and two brothers, Ralph Oliver and Richard Oliver. Surviving are: two daughters, Pam Donnelly of Frisco, Texas and Debbie (& Tim) McKim of Cambridge; a son Doug (& Dina) Donley of Plano, Texas; five grandchildren, Kevin (& Beth) Donnelly, Kyle (& Sara Occhiuzzi) Donnelly, Sam McKim, Drew Donley and Jake Donley; three great grandchildren, Max Donnelly, Leo Donnelly and Maya Luton; a sister-in-law Barbie Donley Stringer; and many nieces, nephews, and great nieces and nephews. A private burial took place at Northwood Cemetery officiated by Evan Greathouse. A celebration of life will be held and announced at a later date. With Grace’s love of Cambridge, memorial donations may be made to the Main Street Summer Flower Project, at 123 Southgate Parkway Cambridge, Ohio 43725, or to Hospice of Guernsey at P.O. Box 1165 Cambridge, Ohio 43725. Grace’s online tribute wall may be viewed and signed at www.bundy-lawfuneralhome.com.

Grace Marie Oliver Donley, age 94 of Cambridge, passed away on Sunday, April 24, 2022 at The Cardinal Place in Cambridge. She was born in Guernsey County on October 2, 1927, a daughter of the late Wilmer Oliver and Anna Mae (Speer) Oliver.... View Obituary & Service Information

The family of Grace Marie Oliver Donley created this Life Tributes page to make it easy to share your memories.

Grace Marie Oliver Donley, age 94 of Cambridge, passed away on...