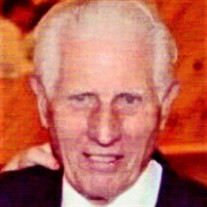 Harvey E. Lewis passed away Saturday, at Riverside Methodist Hospital surrounded by his family: his son, Scott Talbot Lewis, daughter, Sharon Jean Lewis, and grandson, Brian S. Lewis. Born in Wheeling WV on June 20, 1928 he was eldest child of H. Carl Lewis and Burdella (McConnell) Lewis. Raised in Barnesville, OH where he met and married his high school sweetheart Billie Jean (Slocum) Lewis, on July 2, 1950. He was an Army veteran of the Korean War. He started his career working at Ken Bender Motors. He became a vocational educator in automotive mechanics at Cambridge High School, later Guernsey Noble Vocational School retiring in 1992. The couple taught for a combined total of over 50 year in local schools. Harvey often attributed his longevity to the inspiration and satisfaction he experienced from his close relationship with his grandson. A lifelong member of First United Methodist Church, he took an active leadership role in most aspects of church life. Harvey also served as a board member for Feed my People and the Salvation Army. Through his work with Feed my People he served as treasurer and tried to help many people in the Cambridge area. The Salvation Army’s summer sack lunch program and the Christmas dinner box project were activities in which he participated annually. He never wanted anyone to go without. He and his wife accomplished a goal to visit all 50 states. Family vacations were a frequent source of enjoyment and togetherness. A man of strong family values, he was a willing helper, and resource for everyone. Harvey is best remembered by his neighbors’, students and friends as the one who was always willing to lend a hand. He is survived by his sister Helen Detling, and his brother Carl Lee Lewis both of Barnesville, Ohio. He is preceded in death by wife Billie Jean Lewis, his sister Betty A. Lewis and his brother John Dewitt Lewis. Calling hours and funeral service will be on Wednesday, January 16th at First United Methodist Church, 641 Steubenville Ave. Calling hours from 11 am to 1 pm and funeral at 1 pm. Rev. Tina Gallaher will officiate the service with burial to follow in Northwood Cemetery. In lieu of flowers please make charitable contributions to Feed my People, 1101 Steubenville Ave. Harvey's online guest book may be viewed and signed at http://www.bundy-lawfuneralhome.com.

The family of Harvey E. Lewis created this Life Tributes page to make it easy to share your memories.

Send flowers to the Lewis family.