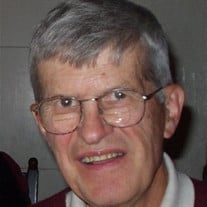 Howard “Bud” Davis Miller, M.D. age 93 of Cambridge, Ohio passed away on Thursday, October 3, 2019 at the Cardinal Place. He was born in Cambridge on October 29, 1925, the son of the late Howard E. Miller and Sarah Jane (Davis) Miller. Dr. Miller was a 1943 graduate of Cambridge High School. He served in the U.S. Navy from 1943 to 1945 before returning to school. He received his undergraduate in 1948 from Ohio Wesleyan (AB) where he was a member of the Sigma Chi fraternity. He then received his M.D. degree from Western Reserve University in 1952. Dr. Miller ran his family practice of medicine in Cambridge from 1954 to 1991. He was so proud of delivering hundreds of babies for his beloved families of Guernsey County. He served 15 years on the Board of Guernsey Memorial Hospital. He was also a member of the Ninth Street United Methodist Church and the Cambridge Kiwanis Club. He was in the Cambridge City Band for over 8 decades, starting from his high school years and he played the baritone in the 4th of July parade when he was 90 years old. He was a 33rd Degree Mason and one of the founding leaders of the Dyslexic Learning Center. He was an avid golfer with two hole-in-ones, and served as president and board member of the Cambridge Country Club. Howard is preceded in death by: his parents; his wife Joan Sue Lyne Miller and a daughter Sara Jo “Sally” Miller - Ling. He married Joan, his high school sweetheart in 1948 and together they enjoyed every day of their 65 years. Surviving are: two sons, Paul Howard Miller and daughter-in-law Karen Hoberg of Rancho Murieta, California and Brett Lyne Miller & Amy Weis of Columbus; two sisters, Joy Brown and Libby Bennett; grandchildren Matthew Ling, James Ling, Kathryn Ling, Drew (Laura) Miller and Alexander Hoberg; and nieces Janet, Deedee & Julie and nephews Keith & Todd. Memorial visitation will be held on Saturday, Oct 19, 2019 at Ninth Street United Methodist Church from 10 am to 11 am with a memorial service to begin at 11 am. Pastor Karen Rawlins will officiate. The family will hold a private burial with Military Graveside Rites in Northwood Cemetery. Memorial donations may be made to the Children’s Dyslexic Learning Center of Southeastern Ohio P.O. Box 1825 Cambridge, Ohio 43725 or to Ninth Street United Methodist Church 129 N Ninth Street Cambridge, Ohio 43725. Howard’s online guest book may be viewed and signed at www.bundy-lawfuneralhome.com.

The family of Howard "Bud" Davis Miller M.D. created this Life Tributes page to make it easy to share your memories.

Send flowers to the Miller family.