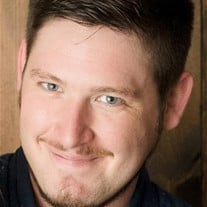 Hugh William Roller Jr passed away at his home in the early hours of Saturday September 14th, 2019 after a long struggle with mental illness. He was 28 years old. Hugh was born to Hugh (Bill) Sr, and the late Debbie Roller on September 19th, 1990, in Marietta, Ohio. He graduated from Cambridge High School in 2009. Working a variety of jobs between then and now, he never quite found something he loved but always found something he was good at. Hugh was talented and could find a way to fix just about anything you needed, especially if it involved modern technology. He loved tinkering with gadgets and taking care of his cars. Hugh was well-liked and had friends everywhere he went. He loved joking around and having a real laugh with his friends. He loved animals and never passed the opportunity to help one that he came across, shown by his dog Buddy and his cat Lucky, both strays he took in and gave a good life. Most of all he loved his beautiful son Holden William Roller, born on September 8th, 2018. Hugh was a great father. He was so proud of his son and genuinely loved showing him off and spending time with him. Sadly, he leaves behind his son and his partner and fiancée of 7 years, Kelsey Ansberry, of Cambridge. He is also survived by his father, Hugh William Roller Sr; his two sisters, Rachel Roller, and Abby (Josh) Davis; two nephews, Keaton and Henry Davis; his Mema, Harriet Hawthorne; his uncle, Rodney Eckles; his aunts, Julianne (Stan) Szymialis, and Theresa (Chuck) Wortman; his uncle, Jonathan Hawthorne; and many cousins. He was preceded in death by his beloved mother, Debbie Roller; his Pepa, Jon Hawthorne; his grandpa, William Eckles; his grandma Elsie Roller; his grandpa Harry Roller; his uncle Richard Roller; his aunt Kathleen Roller; and his uncle, Todd Eckles, to whom he was particularly close. Visitation will be at Bundy-Law Funeral Home on Wednesday, September 18, 2019 from 4 to 8 pm. His service will be held on Thursday also at Bundy-Law at 11 am with Pastor Jon Lobos officiating. In lieu of flowers, donations may be sent to a trust for his son Holden W. Roller c/o Southeastern Ohio Credit Union 115 Market Street Cambridge Ohio 43725. Cremation will follow the service with burial taking place at a later date. Hugh's online tribute wall may be viewed and signed at www.bundy-lawfuneralhome.com.

Hugh William Roller Jr passed away at his home in the early hours of Saturday September 14th, 2019 after a long struggle with mental illness. He was 28 years old. Hugh was born to Hugh (Bill) Sr, and the late Debbie Roller on September 19th,... View Obituary & Service Information

The family of Hugh W. Roller Jr. created this Life Tributes page to make it easy to share your memories.

Hugh William Roller Jr passed away at his home in the early hours...

Send flowers to the Roller family.