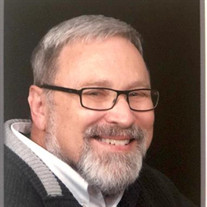 John David Stout passed beyond the reach of pain at the age of 72 on Monday, July 26, 2021 in Columbus, Ohio. Before being taken to the hospital he was living his good life. David died following complications from a heart attack with his loving wife Deborah was at his side. David was born to John P. Stout and Nancy Fugitt Stout in February of 1949 in Ostrander, Ohio; he lived most of life in Cambridge, Ohio. David was a phenomenal storyteller who loved sharing stories from his life. Growing up, in addition to his two brothers, he had several cousins who came to feel like siblings. David graduated from Cuyahoga Falls High School alongside his then high school sweetheart, Deborah. They met through mutual friends and within a year they knew they were meant to share their lives together. David graduated from The Ohio State University with an English Education Major and Journalism Minor in the spring of 1971. David and Deborah married at Cuyahoga Falls First Christian Church the following August. They then moved to Cambridge, Ohio the very next day, where they each began their teaching careers. Shortly after their move, they became members at Cambridge First Christian Church (FCC) where they met and made life-long friends. David completed his Masters in Educational Media from Kent State University in 1977, but missed his graduation out of fear that his first child, Seth, might be born in his absence. Deborah and David welcomed their daughter Sarah in 1981 surrounded by dear friends. Over the course of his 35-year career at Cambridge HS David taught Mass Media, Journalism and English, served as Faculty Advisor to the CHS Yearbook and School Newspaper, became District Media Specialist then CHS Librarian, coached a champion Quiz Team, and several times accepted leadership roles in the Teacher’s Union (CEA) including President. In the late 1970’s and early 80’s he served as Managing Director of the Barn Theater and then as Director of the Salt Fork Arts & Crafts Festival. David served as Treasurer of Charlie Schaub’s mayoral campaigns and as a Civil Service Commissioner. After retiring from CHS in 2006, David went on to bring his decades of experience as a Reference & Young Adult Librarian to the Muskingum County Library Main Branch in Zanesville, Ohio. David retired (for the second time) from Muskingum County Library in Fall of 2014 after 8 years that created cherished friendships. Of all the names David was known by in life, his favorite was being called Grandpa by Ava, daughter of Sarah, who changed his life for the better in the spring of 2012. David’s life centered on family, the church, books, travel, his career and the people he served and loved. In retirement he faithfully volunteered at North Elementary where he loved to read aloud to elementary children. David served as Elder, Sunday School teacher, VBS Director and teacher, Board Chair, and sang in the close-knit FCC Choir for 40+ years. David and Deborah traveled extensively through the U.S. and Europe, often to visit family and friends. David is survived by his wife Deborah; children Seth and Sarah; granddaughter Ava; brothers Roger (Mary) and Jim (Denise) Stout; brothers-in-law, Virl Andrick (Joe Arbo), and Ted (Kathi) Andrick; Sister-in-law Winnie Andrick Sorensen; Aunt Nancy Jewett and Uncle Don (Donna) Stout; numerous beloved cousins, including Patricia, Ruth Anne, and Steve; nieces Charlotte, Andrea, Amy, and Laura; nephews Jason and Scott. He is predeceased by his parents John and Nancy Stout; Aunts Linda Montey and Ruth Prouty; Uncles Joe and Glenn (Edward) Stout. Calling hours will be Friday, August 6, from 4-7:30 pm at Bundy-Law Funeral Home in Cambridge, OH. Please consider wearing masks as you stand in line. In lieu of flowers, the family encourages you to make donations to the Cambridge First Christian Church, 1127 Beatty Ave, 43725.The funeral will be at 11:00 am Saturday, August 7, at the Cambridge First Christian Church. Mr Stout's on-line guest-book may be signed at www.bundy-lawfuneralhome.com.

John David Stout passed beyond the reach of pain at the age of 72 on Monday, July 26, 2021 in Columbus, Ohio. Before being taken to the hospital he was living his good life. David died following complications from a heart attack with his loving... View Obituary & Service Information

The family of J. David Stout created this Life Tributes page to make it easy to share your memories.

John David Stout passed beyond the reach of pain at the age of...

Send flowers to the Stout family.