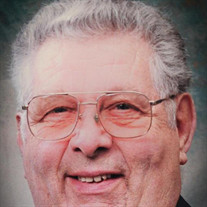 Jack L. DeVolld, 90, of Old Washington, Ohio went to be with The Lord on December 28, 2020. He was born on November 10, 1930, the son of the late Edwin and Junita DeVolld. Jack was married 69 years to Effie Anna VanFossen DeVolld who he married on December 26, 1951 in a snow storm at The Smyrna Methodist Church. Effie survives him. Jack had a very strong Love of The Lord. He was a long time member of The Old Washington Presbyterian Church. He served as an Elder and was always available to help out at the church fixing anything that needed fixing. He served his country for 5 years in The Air Force during The Korean Conflict. His work career took him from Nickles Bakery, Cambridge Glass, Wilson Plastics, NCR, to Heavy Equipment Operator at several strip coal mines in southeastern, Ohio, retiring from Bannock Coal. Jack was a 50 year member of The Centerville Masonic Weyer Lodge #541 and served as Master of The Lodge. Jack was an honorary member of the Stafford Masonic Lodge. Jack was a member of The Centerville Weyer Eastern Star #515. Jack was a former Old Washington Village Councilman and a Republican Central Committeman. He loved spending as much time outdoors as possible. He built purple martin boxes for lots of friends. He would sit for hours on the porch watching the purple martins. He had a real passion for taking care of his garden and the yard had to be always impeccable. He enjoyed raising Registered Herefords, but always made them his pets! Along with his parents Jack was preceded in death by his uncle Bob Atkinson, who he considered a brother. One sister, Barbara Davis. Three brother-in-laws: Dale Davis, Lloyd VanFossen, Joseph VanFossen. Sister-in-law, Alma VanFossen. Son-in-law, Rusty Mace. One niece, Luann Davis. Jack is survived by his wife, Effie. One son Steven (Amy Baby) DeVolld. One daughter, Cheryl (Chuck) Babcock. One brother, Dave (Erin Sue) DeVolld. Brother-in-law, Harold (Phyllis) VanFossen. Sister-in-law, Mildred VanFossen. Three grandchildren: Michael (Kate) DeVolld, Anthony (Stacie) DeVolld, Weston (Autumn) DeVolld. Six great grandchildren: Natalie, Audrey, Wesley, Jaxson, Arralyan, Regan. His cherished nephews and nieces: David (Gwen) Davis, Jeff (Debbie) Davis, Lynne (Howard) Lincoln, Judy (Scott) Beichler, Karen (Tim Brown) Selby, John (Dolli) VanFossen, Dennis (Darla) VanFossen, Janet VanFossen, Sue VanFossen, Max VanFossen. Special Thanks to Dr. Jeffrey Austen and the entire staff at The Cambridge Kidney Care Center who provided Dialysis and very loving care 3 days a week for 11 years. Special Thanks to the staff at the Beckett House for caring for Jack the last 4 months. Due to Covid 19 protocol, no calling hours will be held. Graveside Services will be held at 1:00 PM Thursday December 31, 2020 at The Old Washington Cemetery with Rev. Wes Jones officiating. In lieu of flowers, please consider a donation to The Old Washington Presbyterian Church, PO Box 267, Old Washington, Ohio 43768. or to the Village of Old Washington. An on-line guest-book may be signed at www.bundy-lawfuneralhome.com.

Jack L. DeVolld, 90, of Old Washington, Ohio went to be with The Lord on December 28, 2020. He was born on November 10, 1930, the son of the late Edwin and Junita DeVolld. Jack was married 69 years to Effie Anna VanFossen DeVolld who he... View Obituary & Service Information

The family of Jack L. DeVolld created this Life Tributes page to make it easy to share your memories.

Send flowers to the DeVolld family.