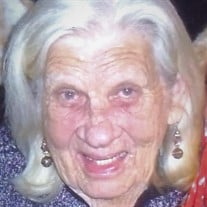 Janice J. Warner, age 88 of Cambridge passed away January 30, 2020 at the Beckett House. She was born on January 2, 1932 in Byesville to the late Edwin "Ted" and Gladys (Shaffer) Griffith. Also preceding her in death was her step-mother Virginia Olden a son Mark Warner and a sister Carol Meighen. Jan was a devoted wife, mother, and grandmother and a career school secretary at the Cambridge Jr. High for over 20 years. She always enjoyed working on projects around the house and yard. She grew a colorful array of flowers and received recognition for her floral arrangements. She was an enthusiast for family activities including camping, boating, and fishing. She liked travel destinations to the South Carolina and Florida beaches and loved entertaining friends. She battled with Alzheimer's disease for many years. Great thanks to the many caregivers who helped her through the many years. Jan is survived by her husband Robert "Sam" Warner of Cambridge of whom she married on December 18, 1954, a daughter Cathy Parks Stein of Blue Rock, a son Scott Warner and Fiancee Rosemary Hanning, 7 grandchildren Jacob Yakubik, Ashley (Kelly) Parks, Samuel Parks, Tyler (Alex) Parks, Twin Boys Branden Warner and Blake Warner and Fiancee Amanda, and Ben Warner, a great granddaughter Harper Grace Parks, 2 sisters Maxine (Howard) Forsythe of Cambridge and Sarah (Robert) Gray of Florida. Calling hours will be from 3:00 to 6:00 on Friday February 7, 2020 at Bundy-Law Funeral Home with funeral services at 11:00 on Saturday February 8, 2020 at the funeral home with Bob Howell officiating.Burial in Northwood Cemetery. Memorial contributions can be made to Hospice of Guernsey, Guernsey County Senior Center, or to the Alzheimer's Association. On-line condolences can be sent to the family at www.bundy-lawfuneralhome.com.

Janice J. Warner, age 88 of Cambridge passed away January 30, 2020 at the Beckett House. She was born on January 2, 1932 in Byesville to the late Edwin "Ted" and Gladys (Shaffer) Griffith. Also preceding her in death was her step-mother Virginia... View Obituary & Service Information

The family of Janice J Warner created this Life Tributes page to make it easy to share your memories.

Send flowers to the Warner family.