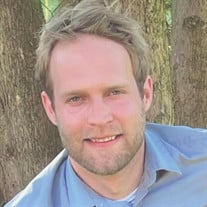 Jared Martin Matthews, age 33, son of Martin "Marty" L. and Cheryl D. Matthews, was born April 26, 1989 in Cambridge, Ohio. He left to be with the Lord on Saturday, April 23, 2022. He is preceded in death by paternal grandparent, Kenneth W. Matthews, maternal grandparents, Jim R. and Dorothy M. Taylor, and Uncle Robbie S. Matthews. He is survived by his parents; sister Brittany A. Matthews (fianc'e Mathew); grandma Betty J. Matthews of Cambridge, OH, aunts and uncles Rhonda and Tom McCoy of Boiling Springs Lakes, NC, Kenny and Sharon Matthews of Cambridge, OH, Doug and Sandy Matthews of Cambridge, OH, Regan Matthews of Cambridge, OH, Jeff and Bev Ross of Dublin, OH, and Allan Ross of Zanesville, OH. He is also survived by a great aunt Theresa Flesher of Blairsville, GA. and by numerous cousins. He will be sadly missed by his four-legged, furry friends- Wyndsor, Bentlii, and BamBam. Jared will be remembered for being unique, intellectual, inclusive, studious, and compassionate. He was a CHS class of '07 advocate, an Ohio State University graduate (dual degrees in Political Science and Philosophy), a sports guru, a fantasy football fanatic, a debate master, and a political conversationalist. He enjoyed playing euchre and cheering on the Detroit Lions. This passing leaves a heartache no one can heal; love leaves a memory no one can steal. We keep in our hearts the love of the past, for there is was planted forever to last. Memorial visitation will be held on Thursday, April 28, 2022 from 3 to 7 pm with a service to begin at 7 pm at Bundy-Law Funeral Home. Pastor Jeff Russ will officiate the service. Burial will take place at a later date in Northwood Cemetery. Jared's online tribute wall may be viewed and signed at www.bundy-lawfuneralhome.com.

Jared Martin Matthews, age 33, son of Martin "Marty" L. and Cheryl D. Matthews, was born April 26, 1989 in Cambridge, Ohio. He left to be with the Lord on Saturday, April 23, 2022. He is preceded in death by paternal grandparent, Kenneth... View Obituary & Service Information

The family of Jared Martin Matthews created this Life Tributes page to make it easy to share your memories.

Send flowers to the Matthews family.