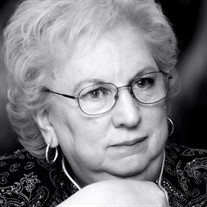 Jeanne Warne Frontz, 79, of Columbus, Ohio died February 11, 2022 after suffering a stroke earlier this year. Born in Cambridge, Ohio, Jeanne came to Columbus after high school to study accounting at Ohio State University. She lived near the campus, working as a house mother and a secretary at OSU hospital while pursuing her studies. After graduating in 1969 with a bachelor's degree in accounting, she stayed in Columbus to raise her two children. Jeanne worked for more than 10 years at Ross Laboratories ( a division of Abbott Laboratories) before becoming a CPA and opening her own tax preparation firm. She continued to practice into her 70s, finding enjoyment in the puzzle of numbers that is federal tax preparation. She also enjoyed a good crossword puzzle and Sudoku. Her accounting skills often benefited her children's schools, where she served as treasurer of the PTAs. She was also a longtime treasurer of the Forest Park Civic Association, and she served on the finance committee at the Church of the Good Shepherd. Family was Jeanne's greatest love, and she made spending time with her siblings and children a priority. In the past eight years, she found added light and liveliness in granddaughter Madelynn A 1960 graduate of Cambridge High School, Jeanne kept her roots to the community strong, maintaining ties to family and friends in Guernsey County. She kept a subscription to the Jeffersonian throughout her life to stay current on the news. She was an accomplished musician, playing both the violin and the organ. Before moving to Columbus, she played the organ at Christ United Methodist Church. She is survived by son Jeffri Frontz (Cindy Decker); daughter Jillian Froment (Kevin Potter) ; granddaughter Madelynn Potter; sister Cheryl Misel (Cash); brother Ralph Warne (Linda); nephew Chris MIsel (Joyce); niece Courtney Pearson (Greg); and many great nieces and nephews. She was preceded in death by parents Elaine and Leroy Warne. A celebration of Jeanne's life will be held Sunday March 6, 2022 at the Bundy-Law Funeral Home. Friends may call from 1:00 to 2:30 with funeral services to follow at 2:30 at the funeral home with Mark Slay officiating. Burial will take place in Northwood Cemetery. In lieu of flowers, donations to support education on the care of those suffering from dementia can be made in Jeanne's name to the National Church Residences Foundation, 2335 North Bank Dr., Columbus, Oh. 43215, Attn: Kate Hunter; or via the following link: www.nationalchurchresidences.org/donate/harmony-trace/. On-line condolences can be sent to the family at www.bundy-lawfuneralhome.com.

The family of Jeanne Warne Frontz created this Life Tributes page to make it easy to share your memories.

Send flowers to the Frontz family.