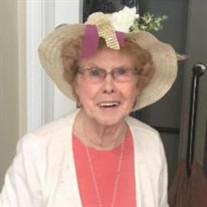 Joann M. Carle, age 89 of Cambridge, passed away on Sunday, September 19, 2021 at Riverside Methodist Hospital in Columbus. She was born on February 21, 1932 in Springfield, Ohio, a daughter of the late John Law and Thelma (Burns) Law. Mrs. Carle was a long time and active member of the First Presbyterian Church in Cambridge. She was also a member and president of the Pilot Club. Joann and her husband Bill had Carle’s Collectibles where they enjoyed collecting and selling antiques. Over Joann’s career, she had worked as a sales clerk at Montgomery Ward; she had been a bank teller and worked in the office at East Muskingum Schools. Joann was preceded in death by: her parents; her husband William E. “Bill” Carle in January of 2019, they were married for 68 years; also preceded in death by a daughter Sandy Connell; a grandson Adam Carle; and several siblings. Surviving are: her children, Diane M. McGarity of Decatur, AL, Steven A. Carle of Decatur, AL and David E. (Michelle) Carle of Hartselle, AL, a brother Glenn (Rita) Law; a sister Doris Mae (Lindy) Crew; five grandchildren, Matthew (Erin) Carle, Amanda (Cody) McDaniel, Eli Carle, Wesley Connell and Nicholas Connell; five great grandchildren, Beckett Carle, Sloan Carle, Isaiah Carle, Noah McDaniel, and Adalyn McDaniel; and a number of nieces and nephews. Visitation will be at Bundy-Law Funeral Home on Tuesday, September 21, 2021 from 4 to 6 pm with a service beginning at 6 pm. Pastor Caleb McClure will officiate the service. Burial will take place on Wednesday at 12 pm at Rose Hill Cemetery in Springfield, Ohio. Memorial donations may be sent to First Presbyterian Church at 725 Steubenville Avenue, Cambridge, Ohio 43725. Joann’s online guest book and service recording will be posted at www.bundy-lawfuneralhome.com.

Joann M. Carle, age 89 of Cambridge, passed away on Sunday, September 19, 2021 at Riverside Methodist Hospital in Columbus. She was born on February 21, 1932 in Springfield, Ohio, a daughter of the late John Law and Thelma (Burns) Law.... View Obituary & Service Information

The family of Joann M. Carle created this Life Tributes page to make it easy to share your memories.

Send flowers to the Carle family.