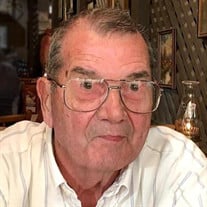 John D. Blair, age 78 of Cambridge, passed away on Wednesday, October 21, 2020 at his home, surrounded by his family. He was born on December 17, 1941 in Cambridge, a son of the late James R. Blair and Wanda Irene (Anderson) Blair. Mr. Blair was a member of the Beckett Avenue United Methodist Church. He served his country in the U.S. Navy from 1961 to 1963. Over the years he had worked at Byrd Ambulance; had been a park ranger at Seneca Lake; was the town Marshall of Senecaville and a special deputy for the Guernsey County Sheriff's Department. John retired from the Cambridge Police Department in 2000 and retired from Blair's Upholstery in 2016. He was also a member of the Cambridge V.F.W. and the Blue Knights. In his spare time John could be found reading, fishing or camping. John is survived by: daughter Kim (John) Charlton of Cambridge; sons, John A. Blair of Cambridge and James R. Blair of South Dakota; a sister B. Jean Melanko of Cambridge; grandchildren, Brandon (Christina) Green, Nicole Blair and Renee' Blair (Andrew Ball), Isabel Charlton, Garth Charlton, Jimmy (Aarika) Blair, Jacob Blair, Leigh Blair, Beth (David) McCoy and Holly Blair; great grandchildren Rylee, Kenleigh, McKenzie, Koltan, Barrett, Ella and Brooke Ball; and several nieces and nephews and great nieces and nephews. He is preceded in death by: his parents; an infant brother James; an infant sister Carol Lee; a sister Judith Allender; and the mother of his children Joann Blair. The family would like to extend a special thanks to Cambridge Cancer Center, Amedysis Hospice, OSU Cancer Center, Dr. Colby and his staff and very close friend Mark Eckleberry. Visitation will be on Monday, October 26, 2020 at Bundy-Law Funeral Home from 11 am to 1 pm with services beginning at 1 pm. Pastor Randy Mercer will officiate. Burial will follow in Northwood Cemetery where Military Graveside Rites will be conducted by the Guernsey County Veterans Council. Memorial donations may be made to Guernsey County Senior Center at 1022 Carlisle Avenue, Cambridge, Ohio 43725. Please adhere to covid guide lines with distancing and masks. John's online guest book may be viewed and signed at www.bundy-lawfuneralhome.com.

John D. Blair, age 78 of Cambridge, passed away on Wednesday, October 21, 2020 at his home, surrounded by his family. He was born on December 17, 1941 in Cambridge, a son of the late James R. Blair and Wanda Irene (Anderson) Blair. Mr.... View Obituary & Service Information

The family of John D. Blair created this Life Tributes page to make it easy to share your memories.

John D. Blair, age 78 of Cambridge, passed away on Wednesday,...

Send flowers to the Blair family.