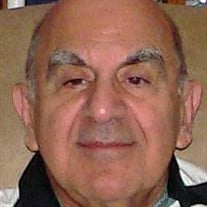 John Edward "Ed" Mitchell, 96, passed away at The Inn at Northwood Village in Dover, Ohio on Sunday April 7, 2019. He was born on March 30, 1923 in Cambridge, to the late John M. and Rose (Kirbawy) Mitchell. He graduated in 1941 from Brown High School and immediately started work at the Westinghouse Naval Ordnance Plant in Dover, Ohio. He declined his defense department deferment and joined the United States Army in January 1942. He rose to the rank of sergeant, commanding an anti-aircraft battery as part of the 383rd Automatic Weapons Battalion on and around New Guinea and the Philippines in the South Pacific theater of operation during World War II. Following an honorable discharge in late 1945, he majored in accounting and graduated from the Ohio State University in 1949 in three years. He worked in private industry, as a government auditor and as a public accountant later in life. He was a member of the First Presbyterian Church. He married the former Mary Ann Mills on November 15, 1949 in Hollywood, CA., and appeared on the radio show "Bride and Groom". They were married for 63 years until the time of Mary's death on July 9, 2013. He enjoyed spending time with both his immediate and extended families. He particularly enjoyed large family gatherings as well as watching Ohio State football and basketball. Ed is survived by his daughter, Janet (Steve) Warden of Dover, Ohio, a son Curt (Linda) Mitchell of Vienna, WV., a grandson Mitchell Warden of Dover, a sister M. Louise (Robert) Mickelson of Delaware, Ohio, 2 brother-in-laws Phillip (Dorothy) Mills of Zanesville, and John "Jack" Simoncelli of Semi Valley, California, 3 sister-in-laws Virginia Fleming of Mahwah, New Jersey, Carole Mitchell of Nelsonville, Ohio and Patricia Mitchell of New Concord, and many nieces and nephews, their spouses and children. He is preceded in death by his wife Mary Ann, his parents, a grandson Brock Warden, brothers Raymond, William, and Richard Mitchell, brother-in-laws Charles and Marian Mills and sister-in-law Mercedes Simoncelli. Calling hours will be held from 10:00 to 12:00 on April 20, 2019 at Bundy-Law Funeral Home with funeral services to follow at 12:00 at the funeral home with Pastor Tara Mitchell officiating. Burial will follow in Northwood Cemetery with military honors conducted by the Guernsey County Veterans Council. Memorial contributions can be made to Hospice of Tuscarawas County at Community Hospice 716 Commercial Ave SW Dover, Ohio 44622 or to the First Presbyterian Church 725 Steubenville Ave Cambridge, Ohio 43725. Online condolences can be sent to the family at www.bundy-lawfuneralhome.com.

John Edward "Ed" Mitchell, 96, passed away at The Inn at Northwood Village in Dover, Ohio on Sunday April 7, 2019. He was born on March 30, 1923 in Cambridge, to the late John M. and Rose (Kirbawy) Mitchell. He graduated in 1941 from Brown High... View Obituary & Service Information

The family of John Edward "Ed" Mitchell created this Life Tributes page to make it easy to share your memories.

John Edward &quot;Ed&quot; Mitchell, 96, passed away at The Inn at Northwood...

Send flowers to the Mitchell family.