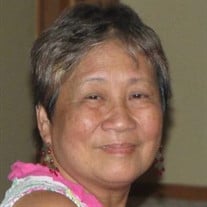 Liwayway Bautista Maximo, 79, of Cambridge, Ohio surrounded by her loving family, went to be with the Lord on November 29, 2019. Liwayway, known to her friends and family as Lily, was born March 6, 1940 in San Miguel, Bulacan, Philippines, daughter of the late Calixto and Engracia (Chico) Bautista. She married Dr. Zosimo Tan Maximo on August 3, 1963. She is preceded in death by younger brother Gieneroso Bautista. She is survived by her loving husband and four children, Franklin (Susan) Maximo of Cambridge, Ohio, Lerma (Victor) Sanchez of Powell, Ohio, Clifford (Jessalin) Maximo of Cambridge, and Zosimo “Jay” (Anjua) Maximo of Shaker Heights, Ohio. Her surviving siblings are Ligaya (Filipe) Rogue, Prescioso (Julie) Bautista, Reynaldo (Evelyn) Bautista, Ruby (Joes) Santos, Mila (Juan) Legaspi, Lina (Danny) Dannug, and Thelma (Aniceto) Cruz. Grandchildren Christopher, Andrew, Lauren, Benjamin, Daniel, Julius, Marlee, Sebastian, Lilee, and Cale. She had many nieces and nephews also. Liwayway graduated from San Miguel High School and was named Homecoming Queen. She received her nursing degree from Chinese General Hospital in Manila in 1962. In June 1966, she came to the U.S. with her husband and two children and worked as a nurse in Steubenville, Ohio. She later moved to Charleston, WV. and worked as a nurse for another four years. While in Charleston, she gave birth to two more children. The family moved to Cambridge in April 1973. Along with devoting many years to fundraising activities for St. Benedict Church and school, Guernsey Catholic Central High School, and Cambridge city schools, Liwayway owned and operated Max Bazaar Party Supply from 1989-2015. She also served as the Chairman of the Decorations Committee at the Tri-State Filipino American Association and recognized by the Association for her 18 years of service. Liwayway enjoyed watching her children and grandchildren excel in sports at Guernsey Catholic Central and Cambridge High School. She was also extremely proud of their academic achievements and professional success. She also enjoyed cooking and playing the penny slot machines. Lily was a generous, selfless, loving person and will be missed by her family and friends. Visitation will be at Bundy-Law Funeral Home on Thursday, December 5, 2019 from 2 to 4 and 6 to 8 pm. Wake services will be held at 7:30 pm. Funeral Mass will be on Friday, December 6, 2019 at Christ Our Light Parish at 11 am with viewing from 10 am to 11 am. Rev. Father Robert Borer and Father Paul Hrezo will officiate with burial to follow in Northwood Cemerery. In lieu of flowers, memorial donations may be made in Lily’s name to Christ our Light Parish and Stroke.org. Lily's online guest book may be viewed and signed at www.bundy-lawfuneralhome.com.

Liwayway Bautista Maximo, 79, of Cambridge, Ohio surrounded by her loving family, went to be with the Lord on November 29, 2019. Liwayway, known to her friends and family as Lily, was born March 6, 1940 in San Miguel, Bulacan, Philippines,... View Obituary & Service Information

The family of Liwayway Bautista Maximo created this Life Tributes page to make it easy to share your memories.

Send flowers to the Maximo family.