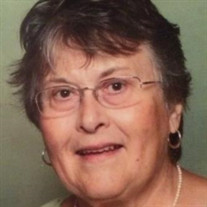 Martha L. Kurtz Knauf, age 80, of Cambridge, OH passed away Wednesday October 31, 2108 at The Cambridge Health and Rehabilitation Center. She was born January 21, 1938 in New Springfield, OH to the late Arthur F. Kurtz Sr. and Fern L. Shoup Kurtz. Martha worked as a medical assistant after attending Carnegie Institute in Cleveland, then worked at the former Cambridge State Hospital, along with her husband owned and operated Liberty Assembly and Service. She was a member of The First Baptist Church in Cambridge. Martha loved talking on the phone, watching the Hallmark Channel, Church events, Spending time with family and friends. She loved gardening and was an avid OSU Fan. Along with her parents Martha is preceded in death by her husband, Harry H. Knauf who passed away November 27, 2016, they were married September 23, 1961. One sister, Joann Kurtz and one brother, Arthur Kurtz Jr. She is survived by one daughter, Brenda (Michael) Holskey of Akron, OH. One son, Todd H. (Lori) Knauf of Cambridge, OH. Three grandchildren: Victoria, Josie, Aja. Three cousins, Karen, Nancy, Jill and many special friends including Sandy. Friends may call from 1:00 pm till 3:00 pm Friday November 2, 2018 at Bundy-Law Funeral Home. The Funeral Service will be held at 3:00 pm Friday with Pastor Jon Lobos and Pastor Dan Milburn officiating and entombment will be in Northwood Cemetery. An on-line guest-book may be signed at www.bundy-lawfuneralhome.

The family of Martha L. Knauf created this Life Tributes page to make it easy to share your memories.

Send flowers to the Knauf family.