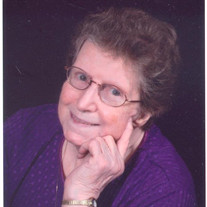 Mary Jane Chalfant, age 84 of Cambridge, passed away on Thursday, February 21, 2019 at Cambridge Health and Rehab Center. She was born on June 27, 1934 in Renovo, Pennsylvania, a daughter of the late Charles A. Saltsman and Letha F. (Saxton) Saltsman. Mrs. Chalfant served her country in the U.S. Navy during the Korean Era. She was a member of the Faith United Methodist Church and had retired from Bank One. She had also worked at General Telephone and Riesbecks. Mary Jane volunteered at Southeastern Med and loved music. She played the organ for several area churches and most recently at the Cambridge Health and Rehab Center church services. She loved her family and cherished the time she spent with them. Mary Jane is preceded in death by: her parents; her husband Richard L. Chalfant Sr. in 2004; a son Richard L. Chalfant Jr; a son-in-law Jim Johnson; three sisters, Madelyn (John) Lirette, Marlene Lavalle and Maxine Putman; and a granddaughter Cindy Hubbard. She is survived by: three daughters, Viola Johnson of Washington, PA, Maxine A. Chalfant of Cambridge and Denise Chalfant of York, PA; two sons, Michael (Robyn) Chalfant of Cambridge and John Chalfant of York, PA; a sister Margaret (Ronald) Neese of Pottersdale, PA; a brother Charles (Becky) Saltsman Jr. of Renovo, PA; a sister-in-law Barbara McKim of Cambridge; grandchildren, Mickey Hubbard, Christopher (Bree) Johnson, Stephany (Mike) Miller, Michael Chalfant, Kati McKeown and Wayne (Cassie) Stevens; great grandchildren, Kilynnen Purdue, Kade McKeown, Mayson and Scarlett Morstad and several nieces and nephews and other extended family and friends. Visitation will be on Sunday, February 24, 2019 at Bundy-Law Funeral Home from 5 to 8 pm. The funeral will be on Monday at noon with visitation an hour prior also at Bundy-Law. Pastor Jeff Calkins will officiate the service with burial to follow in Northwood Cemetery. In lieu of flowers, donations may be made to Faith United Methodist Church 500 S. 7th Street, Cambridge, Ohio 43725. Mary Jane’s online guest book may be viewed and signed at www.bundy-lawfuneralhome.com.

Mary Jane Chalfant, age 84 of Cambridge, passed away on Thursday, February 21, 2019 at Cambridge Health and Rehab Center. She was born on June 27, 1934 in Renovo, Pennsylvania, a daughter of the late Charles A. Saltsman and Letha F. (Saxton)... View Obituary & Service Information

The family of Mary Jane Chalfant created this Life Tributes page to make it easy to share your memories.

Mary Jane Chalfant, age 84 of Cambridge, passed away on Thursday,...

Send flowers to the Chalfant family.