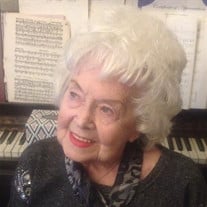 Melba June Greene, age 93 of Cambridge, passed away on Wednesday, April 17, 2019 at her home. She was born on July 3, 1925 in Cambridge, a daughter of the late Oliver R. Tipton and Iona Jeannette (Frame) Tipton. Mrs. Greene graduated from Brown High School. She had started her working career with the F.B.I. in Washington D.C. in the Justice Department. She retired in Cambridge after 25 years of service with the Guernsey County Auditors Office. She was a member of the First United Methodist Church in Cambridge; Eastern Star in La Plata, Maryland; the national and local A.A.R.P; the Senior Center; Toast Masters; the American Federation of Musicians; and the Triple E Ladies Investment Club. Melba was on the board of directors for the Tompkins Center and a chairman of the Arthritis Foundation in Guernsey County. She had attended college classes as a senior citizen at O.U. Cambridge and Zanesville branches. Melba enjoyed: piano, dancing, photography, traveling, swimming and horseback riding, her computer, and her dogs. Melba is preceded in death by: her parents; her first husband Earl William Cowart in 1976; her second husband John S. Greene in 2015; her son Mark R. Cowart; and a brother David Oliver Tipton. She is survived by: a daughter Deborah K. Neff of Prescott, AZ; two step-daughters, April Ann Giesey of Cambridge and Marjorie Elizabeth (David) Luttrell of Howell, MI; two step sons, Stephen Paul Greene of Cambridge and Troy (Jayne) Greene of Marietta; three step grandchildren Brandi (Josh) Jones, Ryan Greene and Kyle Greene; one step great granddaughter Jenna Lynn Jones; an aunt Mary Tipton of Old Washington; and several cousins, Bobbi Henderson, Marsha Beatty, Martha Ann Nuss, James W. Tipton. Visitation will be on Friday, April 26, 2019 at Bundy-Law Funeral Home from 2 to 4 and 6 to 8 pm with Eastern Star Services held at 7 pm. Her memorial service will take place on Saturday, April 27th at 11 am at the First United Methodist Church with Rev. Tina Gallaher officiating. Burial will follow in Northwood Cemetery. In lieu of flowers, donations may be made to Guernsey County Arthritis Foundation or to Hospice of Guernsey. Melba's online tribute wall may be viewed and signed at www.bundy-lawfuneralhome.com.

Melba June Greene, age 93 of Cambridge, passed away on Wednesday, April 17, 2019 at her home. She was born on July 3, 1925 in Cambridge, a daughter of the late Oliver R. Tipton and Iona Jeannette (Frame) Tipton. Mrs. Greene graduated from... View Obituary & Service Information

The family of Melba June Greene created this Life Tributes page to make it easy to share your memories.

Melba June Greene, age 93 of Cambridge, passed away on Wednesday,...

Send flowers to the Greene family.