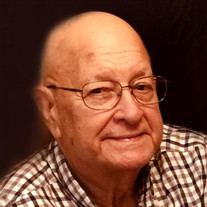 Michael (Don) Donald Daymut of Cambridge, passed away Wednesday July 24th, 2019 at his home surrounded by his loving family. He was born June 3rd 1936 in Gnadenhutten, Ohio. He was the son of Michael and Mary (Kundrat) Daymut. He was preceded in death by his parents, a sister Rosemary (Daymut) Tomcho, an infant brother Daniel Daymut, and step daughter Jeanie Laubach. Don was devoted to "the love of his life" his wife, Grace (Parrish) Daymut for 56 years. They were married April 20th, 1962. They had a very happy life together and were nearly inseparable. He will be so missed by his wife and all of his loved ones. Don leaves behind his son Gary (Rose Marie) Daymut of Senecaville and grandchildren Kayla (AJ) Anderson, Matthew Daymut and Great-granddaughter Emmalyn Anderson. Also his son Bob Daymut of Cambridge and grandchildren Michael (Kayla) Daymut, Gunnar Daymut, Gage Daymut, Andrew Daymut, and their mother Christa Daymut. Great-grandson Grayson Daymut and niece Tara (Mike) Popik. Special family and friends Iona and Frank Rominger, Dale and Marcia Parrish, JonJon Smith, Johnny Barba, Kendra and Blake McCaulley. God children Julianne Balik, Theresa (Seresun) Hubal (deceased), Veronica Seresun (deceased), and Mary Barba. Don was a member of St. Michael's Orthodox Church in Trail Run where he was baptized and served as an altar boy for many years. He attended the Otsego Methodist Church. Don was raised in Byesville and graduated in 1954 from West Tech High School in Cleveland. He served his country in the US Army and worked for International Harvester Trucks in Cleveland. Don attended the Ohio Barber College and after graduation he moved back to Guernsey County working as a barber for 52 years, owning Daymut's Barber Shop. Don loved watching all of his grandchildren play sports, listening to music of the past, and fishing. His favorite hobby was playing the accordion for over 60 years, he was in the Polka Kings Polka Band for over 20 years and entertained at many events. Services will be at Bundy Law Funeral Home Saturday, July 27th calling hours are 10:00 – 12:00 followed by the funeral service at noon with Pastor Dale Parrish officiating. Military graveside services to follow at Guernsey Memory Gardens.

Michael (Don) Donald Daymut of Cambridge, passed away Wednesday July 24th, 2019 at his home surrounded by his loving family. He was born June 3rd 1936 in Gnadenhutten, Ohio. He was the son of Michael and Mary (Kundrat) Daymut. He was preceded... View Obituary & Service Information

The family of MIchael "Don" Donald Daymut created this Life Tributes page to make it easy to share your memories.

Send flowers to the Daymut family.