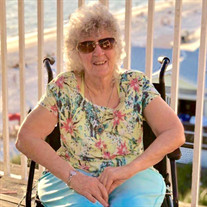 Mildred J. "Millie" Oakley Mildred J. (Casterline) Oakley, 80, of Avon Park, FL, passed away on Thursday, June 17, 2021 at her home with her family by her side. She was born March 08, 1941, in Middlebourne, OH, daughter of the late William H. Casterline and Helen D. (Milligan) Casterline. She was a member of the Middlebourne United Methodist Church in Middlebourne, OH since May 31, 1953 and a 1959 graduate of Washington High School, Old Washington, OH. Mildred "Millie" and Harry R. "Bud" Oakley, Jr. were married on June 12, 1960 at the Beckett Avenue United Methodist Church in Cambridge, OH. Mildred was not only a homemaker raising four children, she was a Military Spouse throughout Harry's 35 years of faithful and honorable service in the U.S. Air Force. Harry's assignments took the family across the United States, to Japan, and to Guam. As the children left the nest, Mildred became a Military Mom as three children entered military service (Air Force, Army, and Coast Guard). Upon Harry's retirement from the U.S. Air Force in 1993, Mildred and Harry moved to Avon Park, FL. Mildred was a resident of Avon Park, FL for 28 years. Mildred enjoyed family time, gardening, reading, and she loved her cats and dogs. In addition to her parents, she was preceded in death by her husband, Harry R. Oakley, Jr., on Nov. 15, 2017. She was preceded in death by three sisters, Inez E. "Betty" Hopkins, on Nov 7, 2006, and infant twin sisters, Beatrice A. (Oct. 01-15, 1945) and Bernice J. (Oct. 01, 1945 - Nov. 05, 1945). Also, she was preceded in death by a brother, Richard Casterline on Oct. 02, 2007. She was preceded in death by her grandson, Mitchell Oakley on April 23, 2016. She is survived by her four children, Michael (Terri) of Geneva, FL; Kathryn of Herndon, VA; Patrick (Laura) of Chandler, AZ; Byron (Heather) of Avon Park, FL; nine grandchildren; five great-grandchildren; a brother, Stephen (Pam) Casterline of Rockaway Beach, MO; and several nephews and nieces. Visitation will be at Bundy-Law Funeral Home on Friday, June 25, from 6 to 8 p.m. Mrs. Oakley's funeral service will be on Saturday, June 26, at 11 a.m. at Bundy-Law with Pastor Karen Rawlins officiating. Burial will follow in the Guernsey Memory Gardens in Cambridge.

Mildred J. "Millie" Oakley Mildred J. (Casterline) Oakley, 80, of Avon Park, FL, passed away on Thursday, June 17, 2021 at her home with her family by her side. She was born March 08, 1941, in Middlebourne, OH, daughter of the late William... View Obituary & Service Information

The family of Mildred J. "Millie" Oakley created this Life Tributes page to make it easy to share your memories.

Send flowers to the Oakley family.