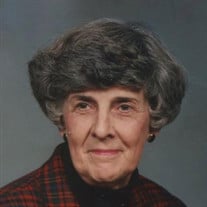 Norma Jean (Kuhn) Watson was born December 6, 1924, in Cambridge, Ohio, only child of the late Wayne O. & Marie (McMillen) Kuhn. She passed away quietly after a short illness on October 13, 2020. She would have been 96 years old in December. Miss Kuhn was a 1942 graduate from Cambridge High School and attended Cambridge Business College (1942-1943). She married the late William J. Watson (1922-1984) from Cambridge in 1944. After completing 25 successful missions as a B-17 radio operator and gunner in the European Theater of Operations, he served the rest of the war in Tampa, Florida, at Drew Army Air Field where he and Norma Jean married and had their first child. After the war, they returned to Cambridge to raise their family and continue the remainder of their lives together. During the war, the two of them wrote over 850 letters to one another over a three and a half year period. Norma Jean and Bill preserved all of the letters against many odds. They tell a remarkable story of love, devotion, and bravery on both of their parts. Norma Jean lived her entire life in Cambridge, raising four sons with her husband. She worked two years as a secretary at the Guernsey County Board of Education, ten years as a secretary at the Cambridge High School, and retired in 1985 after ten years of service with the Guernsey County Children’s Services Board. She was a lifetime member of the First United Methodist Church of Cambridge. She was a member of the Naomi Ruth Sunday School Class and the First United Methodist Women. She was also a member of the Alpha Pi Sigma Sorority of Cambridge. Nicky, as she was lovingly known, volunteered for over thirty years at the Southeastern Medical Center. She was a remarkable woman who was kind, gentle, and brave, and a true lady. She gave her all as a devoted wife and mother for her entire adult life. Mrs. Watson considers her husband Bill’s and her greatest accomplishment to be “the bringing up of four of the most wonderful sons into this world; they have brought us such pride and joy!” She leaves her four adult sons: Michael D. (Carolyn) Watson of Fort Myers, Florida, Mark W. (Brenda) Watson of Hilliard, Ohio, Kim W. (Val) Watson of Flagstaff, Arizona, and Brent A. (Molly) Watson of Sunbury, Ohio; eight grand-children, Nathan Watson of Westerville, Ohio, Erica Watson of Denali Park, Alaska, Nicole Biskaduros of Fairfax, Virginia, Meghan Boyce of Westerville, Ohio, Ben Watson of Denver, Colorado, Matthew Watson of Vandenberg AFB, California, Isaac Watson of Alamogordo New Mexico, and Elena Watson of Lansing, Michigan; eight great grand-children, Ashley Watson of Westerville, Ohio, Jessica Watson of Westerville, Ohio, Gabriel Watson of Vandenberg AFB, California, Rosalie Watson of Vandenberg AFB, California, Blake Biskaduros of Fairfax, Virginia, Bear Boyce of Westerville, Ohio, Iagan Watson of Denver, Colorado, and Nile Watson of Denver, Colorado. In lieu of flowers, memorial contributions may be made to the First United Methodist Church, 641 Steubenville Avenue, Cambridge, Ohio 43725. Visitation will be at the Bundy-Law Funeral Home on Monday, October 19, 2020, from 11:00 am -1:00 pm. The family requests that everyone wear masks and follow instructions to adhere to Covid-19 social distancing by individuals and by groups. A funeral service will be held at 1:00 pm, also at Bundy-Law, officiated by Rev. Tina Gallaher and Rev. Dan Milburn, followed by a committal service and burial in Northwood Cemetery next to her husband Bill. Norma's online guest book may be viewed and signed at www.bundy-lawfuneralhome.com.

Norma Jean (Kuhn) Watson was born December 6, 1924, in Cambridge, Ohio, only child of the late Wayne O. & Marie (McMillen) Kuhn. She passed away quietly after a short illness on October 13, 2020. She would have been 96 years old in December.... View Obituary & Service Information

The family of Norma Jean Watson created this Life Tributes page to make it easy to share your memories.

Send flowers to the Watson family.