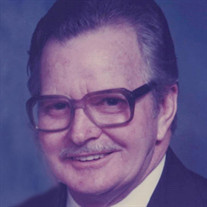 Orton Cash Misel, Jr. age 98 of Cambridge, passed away on Wednesday, November 4, 2020 at The Inn at Winchester Trail in Canal Winchester. He was born on September 25, 1922 in Keithtown, Ohio, Noble County, a son of the late Orton Cash and Marguerite McBride Misel. He is survived by daughter Penny Paoliello and son Cash, III (Cheryl); grandchildren, Elizabeth Ann Paoliello, Christopher (Joyce) Misel and Courtney (Greg) Pearson; great-grandchildren, Lauren, Wade, Allison, Weston, Hope, Katherine, Julia and Audrey Misel, Elliot and Clara Pearson; sister-in-law Lorelle Sarchet; numerous nieces and nephews, including ‘double’ nieces, Nancy Misel and Janet Colyer; and his caring Eastmoor neighbors, including Myrna Patterson, who brought Cash many delicious meals through the years. In addition to his parents, Cash is preceded in death by his loving wife, Ruth Sarchet Misel, whom he married in 1942; sisters, Gertrude (Dick) McLaughlin and Mary Jo (Hal) Feasel; brother William (Mary Elizabeth Sarchet); ‘double’ niece Linda Misel Adkins; and also his beloved pets, dogs, squirrels, ferrets and a groundhog. Cash was a 1940 graduate of Cambridge High School. He then served in the US Army in the European Theater during World War II. He received a Purple Heart Cluster and a Bronze Star as well as other medals. Upon his return home he worked in the lumber business with his dad. He later worked for both Omar and Kennedy’s bakeries. He retired from Western-Southern Life Insurance. Wherever he worked he endeared himself to the customers he served. He was a member of the Ninth Street United Methodist Church, as well as a former member of the Cambridge Lions Clubs, the Guernsey County Historical Society, and the Antique Automobile Club. He had a passion for cars and restored a 1923 Hudson Super Six Essex. He was also well known for his Christmas display (1961-2017). Per granddaughter Beth Ann, “He could fix anything”. A graveside service will be held in Northwood Cemetery on Monday, November 9, 2020 at 1 pm. Pastor Mark Slay will officiate the service with military rites conducted by the Guernsey County Veterans Council. Those honoring Cash by attending are required to wear face masks and practice social distancing. Memorial donations may be made to a local Hospice or to the Guernsey County Veterans Council care of Jim Gibson P.O. Box 572 Cambridge, Ohio 43725 His online guest book may be viewed and signed at www.bundy-lawfuneralhome.com.

Orton Cash Misel, Jr. age 98 of Cambridge, passed away on Wednesday, November 4, 2020 at The Inn at Winchester Trail in Canal Winchester. He was born on September 25, 1922 in Keithtown, Ohio, Noble County, a son of the late Orton Cash and... View Obituary & Service Information

The family of Orton Cash Misel Jr created this Life Tributes page to make it easy to share your memories.

Send flowers to the Misel family.