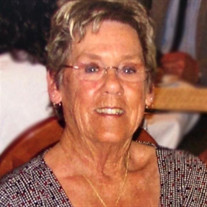 Pamela Sue Smith, age 71 of Cambridge, passed away peacefully at her home, surrounded by her family on Monday, November 25, 2019. She was born on December 24, 1947 in Zanesville, a daughter of the late Robert Gray and Lila (Yarnell) Wilson. Mrs. Smith was a 1966 graduate of Cambridge High School. She received her associates degree from Ohio University in computer science. She was a member of the Guernsey County Senior Center, and played Bridge at the Elks. She and Kenny were avid bowlers and had played in several leagues. Pam worked at NCR for 25 years before moving north and working at Facts Inc. for another 25 years as a CAD designer. Pam is preceded in death by: her parents; her husband of 50 years Kenneth N. Smith, who passed in March of 2010. Also deceased is an infant daughter Heather Marie Smith; a brother Jeff Wilson; and her grandparents, Harriett and Robert Yarnell. She is survived by: her children, Robin (Eric) Lapham of Cambridge, Dawn (Craig) Wisnieski of New Philadelphia and Shane (Jennifer) Smith of Cambridge; her grandchildren, Kellie (Zach) Engstrom, Katie (David) Evancho, Derek Wisnieski, Demi Wisnieski and Laken (Chance) Williamson; her great grandchildren, Milo, Ezra, Cruz, Theo, Emma and Ronan; a brother Greg (Robbi) Wilson of Cambridge; and several nieces and nephews. In keeping with Pam’s wishes, cremation will take place with a Celebration of Life Gathering on December 5, 2019 from 5:00 to 8:00 PM at Stop 9 Church of Christ, small auditorium in Byesville, Ohio. Memorial donations may be sent to Hospice of Guernsey at P.O. Box 1165 Cambridge, Ohio 43725. Pam’s online tribute wall may be viewed and signed at www.bundy-lawfuneralhome.com.

Pamela Sue Smith, age 71 of Cambridge, passed away peacefully at her home, surrounded by her family on Monday, November 25, 2019. She was born on December 24, 1947 in Zanesville, a daughter of the late Robert Gray and Lila (Yarnell) Wilson.... View Obituary & Service Information

The family of Pamela Sue Smith created this Life Tributes page to make it easy to share your memories.

Send flowers to the Smith family.