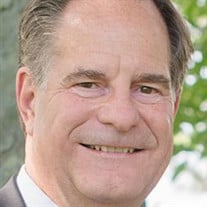 R. Keith Pattison, D.O., age 67 died on January 3, 2019 in Columbus, Ohio where he lived and worked for over 30 years. Born in Cambridge, Ohio to the late H. Elliott and Marjorie I. (McCullough) Pattison. He graduated from Cambridge High School in 1969. He earned his bachelor's degree from Ohio Northern University where he met his wife of 44 years, Gayle Susan (Hoitink) Pattison, and was an active member of the Kappa Psi fraternity. Keith went on to obtain his Doctorate of Osteopathic Medicine from the College of Medicine and Surgery in Des Moines, Iowa. He completed his internal medicine residency at Grandview Hospital in Dayton, Ohio before pursuing a cardiology fellowship at the Cleveland Clinic. For 33 years he practiced as an interventional cardiologist in Columbus where he cared for patients at Doctor's Hospital, Grant Hospital, and Mount Carmel West. He is survived by his wife Gayle; his brother Kent Lee (Linda) Pattison, and his children Zachary Lee (Krista) Pattison, D.O. and Jillian Lee Pattison, D.O., (Jonathan Wood). While Keith was a trained physician he was, at his core, a teacher and extraordinary father. Second only to his family and seeing his children graduate from medical school, his greatest joy came from an endless number of outdoor projects. He was never still for long, taking the dogs for bike rides, clearing paths in the woods, building bridges and treehouses, tending his apple orchard, maintaining the Pattison Disc Golf Course. Anyone who knew Keith understood his love of all games. Whether it was Risk, cornhole, pinball, ping-pong, pool, or euchre, he loved competition and the opportunity to spend time with family and friends. Keith was a caring physician, a kid at heart, and remains the greatest father and husband his family could have imagined. A private burial will be held in Keith's hometown of Cambridge, Ohio with a planned celebration of his life for family and friends in the Spring of 2019. The family wishes are that no flowers be sent to the funeral home, but instead to their home. On-line condolences can be sent to the family at www.bundy-lawfuneralhome.com.

R. Keith Pattison, D.O., age 67 died on January 3, 2019 in Columbus, Ohio where he lived and worked for over 30 years. Born in Cambridge, Ohio to the late H. Elliott and Marjorie I. (McCullough) Pattison. He graduated from Cambridge High School... View Obituary & Service Information

The family of R. Keith Pattison created this Life Tributes page to make it easy to share your memories.

Send flowers to the Pattison family.