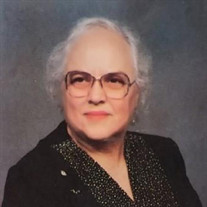 Reba V. Embree, age 93 of Cambridge, passed away on Friday, March 6, 2020 at Astoria Place in Cambridge. She was born on a farm in Wameno, Kansas on October 24, 1926, daughter of the late Otis and Mary (McClellan) Elliott. Reba attended a one room school near Aurora, Kansas and graduated from Glasco Rural High School in 1944. She married Edward Embree of Zanesville in 1945, he passed away on April 24, 1990. She is also preceded in death by: three brothers, Rex, Cleo and Keith Elliott, sister Theda Brandley. Surviving are: a daughter, Connie (Mike) Wayne of Plattsburgh, New York; three sons, Keith (Nancy) Embree of Columbus Indiana, Dana Embree of Nashport, Ohio, and David (Brenda) Embree of Hillsboro, Ohio; a brother Lyle Elliot of Maryland; six grandchildren, Jennifer (Brian) , Troy (Jennifer) Embree, Kevin (Tracy) Embree, Jared Embree, Summer Embree and Mary (Mike) Harmon; several great grandchildren and nieces and nephews. Reba was a member of the First United Methodist Church and the Sunday School Class; the Eastern Star chapter 211 and the Senior Citizens. She retired from Champion Spark Plug after 28 years of service, she served as president and secretary for the Champion Spark Plug Retirees for 15 years after. She visited shut ins for the church and volunteered for the Living Word for many years as well. Reba and her husband Edward owned and operated Embree Sheet Metal for over 36 years. Visitation will be at Bundy-Law Funeral Home on Tuesday, March 10, 2020 from 11 am to 1 pm with the service at 1 pm. Rev. Tina Gallaher will officiate with burial to follow in Northwood Cemetery. Memorial donations may be sent to Hospice of Guernsey at P.O. Box 1165 Cambridge, Ohio 43725. Reba's online tribute wall may be viewed and signed at www.bundy-lawfuneralhome.com.

Reba V. Embree, age 93 of Cambridge, passed away on Friday, March 6, 2020 at Astoria Place in Cambridge. She was born on a farm in Wameno, Kansas on October 24, 1926, daughter of the late Otis and Mary (McClellan) Elliott. Reba attended... View Obituary & Service Information

The family of Reba V. Embree created this Life Tributes page to make it easy to share your memories.

Send flowers to the Embree family.