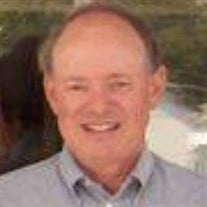 Rex E. Gray, age 74, of Old Washington, passed away on Wednesday, January 23, 2019 at his home. He was born at home in Salesville, a son of the late Raymond A. Gray and Verna L. (Voorhees) Gray. Mr. Gray was a 1962 graduate of Old Washington High School. He was a proud member of the Cardinal basketball team and was part of the 1960-61 team that had a record of 27-1 and lost in the regional finals. He had worked in accounting for Sohio / BP. After retirement, Rex and his wife became Real Log Home independent dealers. Rex was a member of the Middlebourne Methodist Church, the Old Washington Village Council and the Guernsey Eagles #386. He was a sports fan and enjoyed watching the all the Cleveland teams and the Buckeyes. He loved his old cars, his special cat Little Girl, and visiting with his buddies at Denny’s. He also enjoyed hunting and traveling and going to the casinos in Las Vegas. He leaves: his wife of 50 years, Cheryl L. (Johnson) Gray; two brothers, Arthur (Eloise) Gray of Salesville and Paul Gray Senecaville; a sister Betty (Larry) Parry of Lore City, sister-in-laws, Linda (Paul) Johnson of Columbus, Cris (Terry) Wolford of Nashport, Cindy (Tom) Woolum of Gahanna; an aunt Sally (Neil) Bonar; many nieces, nephews, great nieces and nephews, and cousins and special friends. He was preceded in death by: his parents; nephew, Brent A. Gray; his father and mother in law, Harry R. and Doris J. Johnson; a brother in law Richard Johnson; and sister-in-laws, Denise Scott and Rhonda Gray. Visitation will be on Monday, January 28, 2019 at Bundy-Law Funeral Home from 11 am to 1 pm with the service at 1 pm. Rev. Clayton Coffey will officiate the service with burial to follow in Guernsey Memory Gardens. In lieu of flowers, donations may be made to the American Cancer Society or to Southeastern Med Cambridge Regional Cancer Center / 1410 Clark St, Cambridge, OH 43725. Rex’s online guest book may be viewed and signed at www.bundy-lawfuneralhome.com.

Rex E. Gray, age 74, of Old Washington, passed away on Wednesday, January 23, 2019 at his home. He was born at home in Salesville, a son of the late Raymond A. Gray and Verna L. (Voorhees) Gray. Mr. Gray was a 1962 graduate of Old Washington... View Obituary & Service Information

The family of Rex E Gray created this Life Tributes page to make it easy to share your memories.

Send flowers to the Gray family.