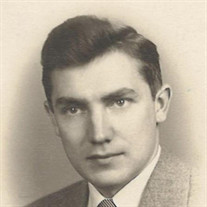 Richard H. “Dick” Buchsieb, P.E. was born February 1, 1931 to Walter William and Emma (Held) Buchsieb in Columbus, Ohio. He passed away on October 10, 2020 at The Ohio State University Medical Center, surrounded by his children. “Dick”, as he was known to all who knew him, graduated from Bexley High School, Capital University, and The Ohio State University School of Engineering with a Bachelor of Industrial Engineering degree. During his time at Ohio State, Dick was a member of the Army ROTC. After graduation, Dick married Beatrice M. “Bebe” Lawyer on January 15, 1955. He then served in the US Army as a Lieutenant at Fort Sill in Oklahoma and the Nike Air Defense Missile Battery in Waldorf, Maryland. He continued his services in the Army Reserve Corp for many years, achieving the rank of Major in the U.S. Army. Upon their return to Columbus, Dick began his career as an engineer with The Jeffrey Manufacturing Company, and then worked for almost 50 years with the Cantwell Machinery Company of Columbus, Ohio. He was a member of the Society of Mining Engineers, the Ohio Coal Association, the Holmes Safety Association, and the Ohio Mining and Reclamation Association and retained his status as a Registered Professional Engineer. In 1960, Dick and Bebe and their first two children moved to Cambridge, Ohio, where Dick began a long history of community service. He was the leader of the “Hopi” tribe of the YMCA Indian Guides organization, eventually leading the Indians Guides for the entire Cambridge area; he was a supporter of the YMCA Swim Team; and he was very active with and served as president of the Cambridge High School Band Boosters from 1970 until 1983. He also served on and was president of the board of the Cambridge Concert Association, bringing outstanding musical performances to the Cambridge community for over 40 years. He was a member of the First United Methodist Church, its Co-Wed Sunday School class, and the Chancel Choir for over 60 years, and was a member of the Administrative Board and the Board of Trustees at the church. He also performed in and served as a member of and president of the board of The Living Word Outdoor Drama for many years. Dick was a member of the Guernsey County OSU Alumni Club, and was responsible for raising scholarship funds and awarding scholarships to top students from the local area who were enrolled at OSU for over 40 years. He was a member of the Cambridge Tree Commission, as well as a member of the Cambridge Kiwanis Club and the Guernsey County Republican Central Committee. In 2011, Dick and Bebe were honored at the Governor’s Mansion by the Ohio Department of Aging for their years of volunteer service to the community. Dick was a member of Guernsey Lodge No. 66 F&AM; member of the Scottish Rite Valley of Cambridge (32nd Degree), and member of Kambri Shrine Club. Dick was preceded in death by Bebe, his wife of 61 years. He is survived by his four children: Carol (Bill) Padden of Cambridge, Ohio; Sara (Michael) Petievich of St. Croix, U.S. Virgin Islands; Richard H. (Erin) Buchsieb, Jr. of Columbus, Ohio; and Laura (Joseph) Stephens of Charleston, South Carolina; along with his five grandchildren: Emma Rumberg, Zoe Petievich, Anna Rumberg, George Rumberg, and Willem Buchsieb. Dick is also survived by his brother and sister-in-law Walter C. and Betty Buchsieb of Columbus, Ohio and their children Chuck Buchsieb and Christine Bardon, and his nephew Jay Robinson. Memorial contributions may be made in Dick’s name to the Guernsey County OSU Alumni Club Scholarship Fund, the First United Methodist Church (641 Steubenville Avenue, Cambridge, OH 43725), The Living Word Outdoor Drama (PO Box 1481, Cambridge, OH 43725), or to the charitable organization of choice. A graveside funeral service will be held on Friday, October 16, 2020 at Northwood Cemetery, Cambridge, Ohio, at 1:00 p.m. Masonic Services will be held at the graveside also. The family requests the wearing of facial coverings and the practice of safe distancing during this gathering. Dick's online guest book may be viewed and signed at www.bundy-lawfuneralhome.com.

The family of Richard H."Dick" Buchsieb created this Life Tributes page to make it easy to share your memories.

Send flowers to the Buchsieb family.