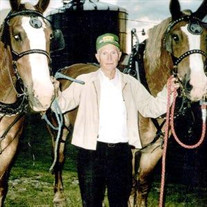 Robert (Bob) L. Hendershot, age 88 of Cambridge, passed away on Monday, November 29, 2021 at The Cardinal Place. He was born on October 16, 1933 in Quaker City Ohio, a son of the late Cyril S. Hendershot and Reba E. (Hartley) Hendershot. Bob was a 1951 graduate of Quaker City High School. After graduating high school, he worked for the railroad. He then became a dairy farmer, which he continued to do for approximately forty years until his retirement. Bob began his farming career using horses which, would lead to his primary hobby later in life. He also worked as a school bus driver for Madison and East Guernsey Schools. Bob was an active member of his community and was involved in numerous community and farming organizations. He was active in the Guernsey County Farm Bureau and served 15 years on the board, 11 of those as president. He was on the State Landmark and State Farm Bureau Board for eight years and was elected as a Madison Township Trustee for 5 years. Bob was also very active in the Republican Party and was on the County Election Board. He also served as Guernsey County Commissioner for one term in the early 2000s. He was a member of the Antrim United Methodist Church, the County Dairyman’s Association, the Ohio Cattleman’s Association, the Golden Sixties and an Honorary Member of the Trustee and Clerks Association. Bob’s main hobby was caring for and raising draft horses. He had two separate teams of Belgian Draft Horses, Tom and Jerry, and Duke and Dan. Bob would take the horses to numerous parades and events in the community and was always proud to show them off. On June 12, 1954 Bob married Mary Ann (Perry) Hendershot. They were married for 51 years. Bob is survived by his daughter Reba Ann Norman, his son Richard Allen Hendershot and his wife Carol Hendershot and four grandchildren, Sharon Ann, Ethan & Cody Norman and Scott Hendershot. He is also survived by dear friend Elizabeth "Betty" Clark. Due to unfortunate circumstances, funeral services will be postponed to a later date. Bob's online guest book may be viewed and signed at www.bundy-lawfuneralhome.com.

Robert (Bob) L. Hendershot, age 88 of Cambridge, passed away on Monday, November 29, 2021 at The Cardinal Place. He was born on October 16, 1933 in Quaker City Ohio, a son of the late Cyril S. Hendershot and Reba E. (Hartley) Hendershot.... View Obituary & Service Information

The family of Robert L. "Bob" Hendershot created this Life Tributes page to make it easy to share your memories.

Send flowers to the Hendershot family.