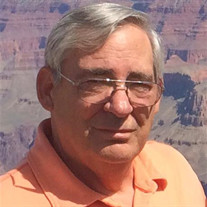 Robert T. Werner, 75, passed away peacefully October 9, 2019, surrounded by his wife and two children. Robert was born September 10, 1944 in Chicago, Il, and was a longtime resident of Guernsey County, Ohio. Mr. Werner dedicated much of his life to helping others. When his children were young, he volunteered as a softball and baseball coach. He was instrumental in the formation of the Samaritan Center of Cambridge, Ohio. He devoted many years to the Guernsey County Habitat for Humanity building homes, working with families on financial counseling, and serving on the board of directors. He volunteered at Presmont Church camp building counselor cabins and performing grounds maintenance. Mr. Werner was also a longtime member of St. Benedict Parish where he served as a Eucharistic Minister to the local rest home, a member of the RCIA team, and served as a member of the Knights of Columbus. In his spare time, Robert enjoyed watching baseball and playing golf. He was a Veteran of the US Navy and earned a bachelor’s degree in accounting from the University of Illinois and an MBA from the University of Dayton. Mr. Werner was retired and was previously employed at NCR, Roekel Company, Muskingum University, Mideast Technical College, and Ohio University Belmont. Mr. Werner loved spending time with family, especially his grandchildren. He is survived by: his wife of 42 years, Kathy (Pattison); a son Thomas of Powell, Oh; a daughter Sara of Tampa, Fl; and four grandchildren, Jack Johnson, Samantha Werner, Dean Werner, and Brielle Werner. He is also survived by a sister Pat (Werner) Peotter of Marengo, Il; a brother Jim Werner of Manteno, Il; a sister Darlene (Werner) Predelski; and several nieces and nephews. Mr. Werner is proceeded in death by: parents, Clarence Peter and Kathryn (Hanton) Werner; a sister Karen (Werner) Schoenecker; and nephew Kevin Schoenecker. Visitation will be at Bundy-Law Funeral Home on Saturday, October 12, 2019 from 11 am to 2 pm with the service to begin at 2 pm. Rev. Father Robert Borer will officiate the service with burial following in Mt. Calvary Cemetery. Memorial donations may be made to Hospice of Guernsey P.O. Box 1165 Cambridge, Ohio 43725. Robert’s online guest book may be viewed and signed at www.bundy-lawfuneralhome.com.

Robert T. Werner, 75, passed away peacefully October 9, 2019, surrounded by his wife and two children. Robert was born September 10, 1944 in Chicago, Il, and was a longtime resident of Guernsey County, Ohio. Mr. Werner dedicated much of... View Obituary & Service Information

The family of Robert Thomas Werner created this Life Tributes page to make it easy to share your memories.

Send flowers to the Werner family.