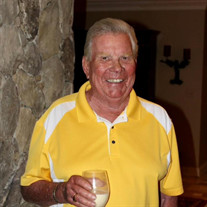 Ronald William Ayers, age 81 of Cambridge, Ohio, and Pinellas Park, Florida, passed away on July 10, 2021, in Charlotte, North Carolina, at the Levine Hospice of Southminster after a brief battle with cancer. Ron was born March 21, 1940, in Batavia, Illinois, the third child of John “Bud” and Edith (Hanson) Ayers. He spent his childhood in the Northwest Indiana area and grew up in Munster, Indiana. He graduated from Munster High School and then obtained a degree in Insurance and Risk Management from Indiana University. He is survived by his wife, Sue (Martin) Ayers. They would have celebrated 61 years of marriage this fall. They moved to southeastern Ohio early in their marriage, first to Zanesville and later moving to Cambridge, where they resided for more than 50 years and called home. Dad was a life member of the Cambridge Elks Lodge #448. Over time, Dad became a big Ohio State Buckeye fan and would always pull for them unless they played the Hoosiers. He spent his professional life in the insurance industry as a claims adjustor, spending the last 25 years of his career with Westfield Insurance Company, where he retired early at the age of 57. After his retirement, Dad & Mom split their time between Ohio and Florida over the past 24 years, most often on a golf course. Ron was preceded in death by his parents, his in-laws, Aubrey & Mary (Dillion) Martin and his sister, Shirley Ayers Jud. In addition to his wife, Sue, he is survived by his brothers Jack (Ann) Ayers, Tom (Kitty – deceased) Ayers and his brother-in-law, Hank (Melinda) Jud. Also surviving, his children, Julie (Rich) Paton of Aurora, Ohio, Mark (Lorri) Ayers, Charlotte, North Carolina, and Scott (Debbie) Ayers of Matthews, North Carolina. During his lifetime, he was blessed with five grandchildren, Chris, Abigail, Chad, and Tyler Ayers and step-grandson Zachary Paton. After his family, Dad’s greatest love was the game of golf. He loved every aspect of the game and passed this love on to his children and grandchildren. He spent a lot of time on the golf course and was a member of Cambridge Country Club for more than 40+ years. His family estimates he played more than 2,000 rounds or 36,000 holes, many with good friend Chuck Jones at CCC. He had three hole-in-ones over the years (all with yellow Pinnacle #3), with the last one coming just two years ago, 33 years after the 2nd. Dad always searched for the perfect putter to improve his game (owning more than fifty) or buying the latest chipper or driver if he thought it would help him around the green or off the tee. But he was always going back to hitting yellow Pinnacle #3’s. Golf was always finished with a toast on the 19th Hole, no matter where he teed it up that day. The family invites everyone to a Celebration of Life on Sunday, July 25, 2021, from 4:00-6:00 PM at the Cambridge Country Club 60755 Southgate Road Byesville, Ohio, with a toast to be raised in his honor at 5:00. Burial will be private at Northwood Cemetery. The family wishes to extend a special thank you to Scott Stevens & his son Devin, of Cambridge, Ohio for their friendship, support and help, all these years when his children did not live in the Cambridge area. In lieu of flowers, the family requests donations be sent to the Cambridge Elks Scholarship Fund: In Honor of: Ron Ayers, PO Box 484, Cambridge, Ohio 43725.

Ronald William Ayers, age 81 of Cambridge, Ohio, and Pinellas Park, Florida, passed away on July 10, 2021, in Charlotte, North Carolina, at the Levine Hospice of Southminster after a brief battle with cancer. Ron was born March 21, 1940, in... View Obituary & Service Information

The family of Ronald William Ayers created this Life Tributes page to make it easy to share your memories.

Send flowers to the Ayers family.