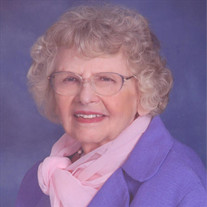 Ruth Patterson Anderson, 98, passed away peacefully, following a brief illness, surrounded by loving family, on March 31, 2019 in Cambridge, Ohio. She was born in Cleveland, Ohio to the late Florence Bolt Patterson and Mark A. Patterson. She had an older sister, Wilma, and a younger brother, William Robert (Bud) who are both deceased. She was a proud graduate of The Ohio State University and a life-long member of Kappa Alpha Theta sorority. She graduated with a degree in dietary science in 1942 and a few weeks later married John W. Anderson, a fellow OSU graduate. They spent most of their fifty-four years of married life in Lakewood, Ohio and had two children – Kristine F. Anderson (Hulan Webb) and John P. (Rebecca Wright) Anderson. She is also survived by five grandchildren – Kelly Anderson (Tim) Adlesh, Eric (Hillary) Anderson, Kristi Webb (Jaret) Deprin, Matthew A. Webb, and H. Andrew Webb, and four great-grandchildren – Clayton Adlesh, Mason Adlesh, Anderson Adlesh, and Rory Adlesh. She will also be missed by several dearly loved nieces and nephews scattered around the country. After her children got older, Ruth returned to college to get her teaching certification and taught kindergarten in the Lakewood Public Schools for twenty-five years. She was a member of Our Savior’s Rocky River Lutheran Church for over seventy years and served on the Church Council. A committed educator, she also taught Sunday School and helped start Our Savior’s Pre-School. She often said the secret to a long life was a strong faith in God and good medical care. Throughout her life, she was an avid reader and a competitive Bridge and Scrabble player. She loved to travel and was particularly interested in ancient Egypt. She studied Spanish and cruised to Mexico at age 93. In her later years, she lived in Rocky River and was active in the Rocky River Senior Center. She especially enjoyed weekly Bridge games and performing with the Rocky River Rockettes. She made many friends in Cambridge as a member of Christ’s Lutheran Church and the Guernsey County Senior Citizens Center. Calling hours will be Friday, April 5, 6:00-7:00 pm at Bundy Law Funeral Home, Cambridge. Visitation will also be Sat., April 6 beginning at 10:00 am with the Service at 11:00 am at Christ’s Lutheran Church, 1101 Steubenville Ave., Cambridge, OH. In lieu of flowers, the family asks that donations be made to Christ’s Lutheran Church, the Guernsey County Senior Citizens Center, or the charity of your choice. Ruth’s online tribute wall may be viewed and signed at www.bundy-lawfuneralhome.com.

Ruth Patterson Anderson, 98, passed away peacefully, following a brief illness, surrounded by loving family, on March 31, 2019 in Cambridge, Ohio. She was born in Cleveland, Ohio to the late Florence Bolt Patterson and Mark A. Patterson. She... View Obituary & Service Information

The family of Ruth Patterson Anderson created this Life Tributes page to make it easy to share your memories.

Send flowers to the Anderson family.