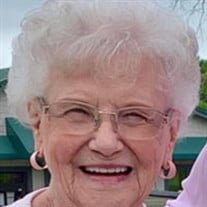 Sandra J. Knox Thatcher, age 84, of Cambridge, OH passed away Sunday, September 5, 2021 at her home. She was born on October 2, 1936 to the late Hazel and Harold Pierce in Cambridge, OH. Sandra was a very active member of Faith United... View Obituary & Service Information

The family of Sandra J. Knox Thatcher created this Life Tributes page to make it easy to share your memories.

Send flowers to the Thatcher family.